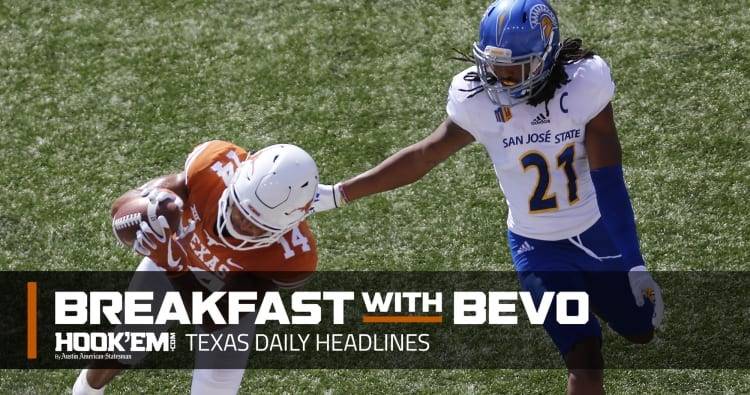 Senior receiver Lorenzo Joe learned of his brother’s passing last Tuesday and, with the support of his family, chose to stay with his team through the win over Iowa State. His teammates’ support may have been the best thing for him at the time. Joe was able to make his brother’s funeral on Saturday.

This week, Austin American-Statesman columnists Kirk Bohls and Cedric Golden chat with Kansas State football coach Bill Snyder. The long-time coach will face the Longhorns on his 78th birthday and the columnists ask how long he will coach. Bohls and Golden also talk about a few issues the Texas offense is facing.

Who will lead the Longhorns in rushing this week? Will Collin Johnson get more targets? Will Texas stick with Shane Buechele no matter what? The Longhorns also need to address who will lead this offensive attack. With Connor Williams out with injury, the offensive leadership needs to come from somewhere.

Texas cross-country runners Alex Rogers and Sam Worley go way back. Both graduated from New Braunfels Canyon, two years apart. Rogers mentored the younger Worley when Worley was a freshman in high school and the rest is history. Now running for UT, the duo eyes the Big 12 meet near the end of October. On the soccer field, Texas goalkeeper Nicole Curry is looking to make history in Friday’s contest with TCU.

Texas still has work to do in the 2018 recruiting class