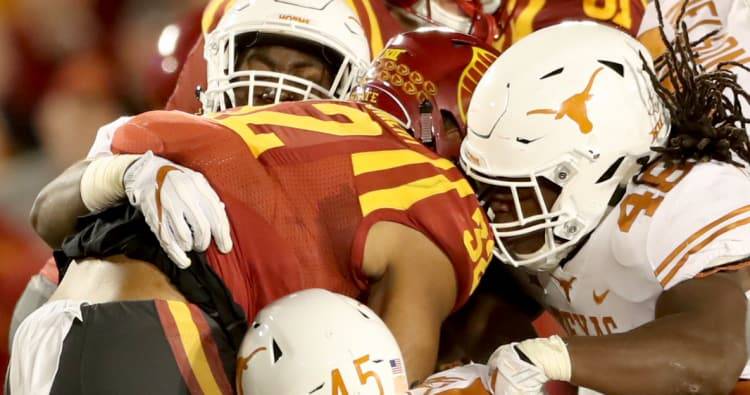 Vance Bedford took a verbal beating every week the last two years for Texas’ porous defense. Nobody wanted to succeed more than the Texas ex who became the school’s proud defensive coordinator.

But look back at all the freshmen Bedford sent onto the field in 2015. Malik Jefferson was only months removed from Mesquite Poteet. Anthony Wheeler, Chris Nelson and Charles Omenihu had never played before. DeShon Elliott, P.J. Locke III, Kris Boyd and Holton Hill didn’t know which end was up.

“As a freshman,” Elliott said this week, “you walk in and think, I don’t even know how to memorize these plays.”

Two years later, all of those Longhorns have grown into experienced upperclassman. Now the game is slower. It’s easier to understand. Current defensive coordinator Todd Orlando has provided a fresh set of eyes and a different mindset.

Mix all that together and you have a sturdy Texas defense that might ignite the program’s turnaround. The Longhorns (2-2, 1-0 Big 12) can take another step forward on Saturday against Kansas State (3-1, 1-0).

Freshman quarterback Sam Ehlinger is expected to start for the Longhorns, according to sources. A UT spokesman would not confirm coach Tom Herman’s apparent decision, though. Asked about his confidence level in Ehlinger on Thursday, Herman said, “Great.”

“Sam is 1-1 as a starter, with the one loss being 42 seconds away from a win at the Coliseum against USC,” Herman said. “All of us in this program believe in him and believe that he can win us football games.”

Ehlinger might be playing behind a backup center, too. Starter Zach Shackelford will likely be a game-time decision after rolling his surgically-repaired ankle in practice. If Shackelford can’t go, junior walk-on Terrell Cuney will start.

A freshman quarterback playing behind a walk-on center and freshman Derek Kerstetter at right tackle? Sounds like another chance for Orlando’s crew to carry the day against Bill Snyder’s well-prepared bunch.

UT’s defensive transformation in September was astounding. The unit allowed 44 of 51 points in the season-opening loss to Maryland. The Terps scored another touchdown by returning a blocked field goal. Many observers, including the coaching staff, had the same thought: What was that?

“To be honest with you, we can go in there and just Tommy gun everybody,” Orlando said. “We didn’t. Personally, I did not. We tried to correct the mistakes and figure out the why. Why can’t we set an edge? Why can’t we do this?”

Herman and Orlando said the Longhorns fell back into their bad habits against Maryland. The new coaches saw the same problems that Texas had in 2015 and 2016. Those two defensive units were statistically among the worst in school history.

Ultimately, it was a huge wake-up call. Do the Longhorns want to try it Orlando’s way or not?

“Sometimes you need to get your butt kicked and be humbled,” Orlando said. “Sometimes that’s the best thing that can happen to you. I think that’s a piece of it.”

So the Horns went back to work. It all started with a focus on stopping the run, something Orlando believes is the bread-and-butter starting point. The next week, San Jose State managed just 42 rushing yards. The Longhorns won a 56-0 blowout.

Texas players spent the next six days hearing all about USC’s Ronald Jones II. The Trojans were the nation’s fourth-ranked team. Their quarterback was a Heisman contender. So on and so forth.

But there was a pivotal moment in the first quarter at the Coliseum. The Trojans drove 79 yards to the Texas 1 and went for it on fourth-and-goal. When Jones tried to punch it in, Malcolm Roach and Naashon Hughes closed it down and stopped the Trojans cold. It was an adrenaline rush like no other.

“It was amazing to see that those guys that we train with, that we work so hard with, we come together as a unit and say, ‘Hey we’re going to do it, make this happen,’” Omenihu said. “And it’s just beautiful.”

Wheeler finished with 12 tackles and 1.5 sacks. Jefferson had 11 tackles. Omenihu had a sack. Elliott had two interceptions and returned one for a touchdown. Yes, Texas lost 27-24 in double overtime, but it was a huge moment for this defense. The Trojans had only 68 rushing yards.

All the confidence gained in Los Angeles was on display in Ames, Iowa, in UT’s Big 12 opener last week. The Longhorns had four sacks, four tackles for loss and three interceptions. Elliott had two himself and was named the Big 12 defensive player of the week in back-to-back games.

Iowa State faced a do-or-die fourth down from midfield with about 12 minutes left. Jefferson said he and linebacker Breckyn Hager changed the blitz call at the line of scrimmage. Jefferson went blazing into the backfield and smashed Jacob Park for a 12-yard loss.

The game was effectively over. Texas won 17-7 but probably would’ve posted another shutout if not for a shanked punt. Iowa State had only 10 rushing yards, the fewest allowed since 2011 and tied for the 16th-lowest total since 2000.

Four games into the season, the Texas run defense ranks 17th nationally. Two years ago with all those freshmen, the Longhorns were 119th.

“I think with the way we do training, what we’re asking them to do, they’re starting to understand our personalities in terms of what we want to run,” Orlando said. “At some point it’s like, ‘OK, I’ve got this. I’ve done this a million times. This is the way he wants to do it.’ Or, they’re anticipating what we’re going to call.

“They are a seasoned group and they’ve been through a lot of defenses as well.”

K-State quarterback Jesse Ertz has rushed for 221 yards and scored twice in his last two games. He ranks third in school history in quarterback rushing yards with 1,395. He will face a bunch of Longhorns who want to build on their defensive success.

“The training wheels are off,” Orlando said. “It’s full go.”

Texas’ notable number: Time of possession — and the number 11