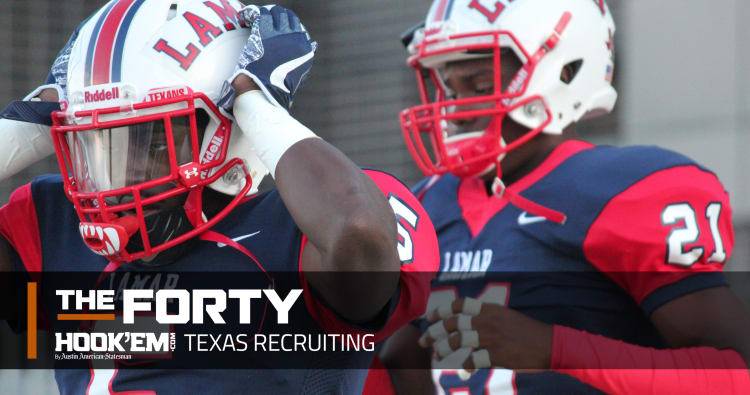 An important month of recruiting awaits

Texas’ 2018 class is ranked second in the nation and first in the Big 12. It’s 18 members deep, with 11 of those commitments represented on the Fabulous 55. The top three players in the state – Jalen Green, Caden Sterns and BJ Foster – are all committed to the Longhorns.

Texas could add the fourth best player in the state by the end of October if the Longhorns can secure a commitment from 5-star cornerback Anthony Cook, who’s set to decide on Oct. 30. Tom Herman’s staff expects to hear good news on Oct. 14 when Cook’s teammate, D’Shawn Jamison, a 4-star cornerback, decides between TCU and Texas.

Texas is the home team for the next three games, meaning the staff will host numerous 2018, 2019 and 2020 targets and commits in October. That includes the Red River Rivalry game. Only the home team in Dallas can host recruits and it’s the Longhorns’ turn.

Barring a de-commitment, Texas should be done recruiting quarterbacks and running backs on the offensive side of the ball. Texas holds commitments from 4-star quarterbacks Cameron Rising (Calif.) and Casey Thompson (Okla.), as well as 4-star running back Keaontay Ingram of Carthage. The Longhorns are expected to sign one running back in the class.

The wide receiver and tight end positions are nearly full. Three receivers who qualified for The Opening Final are committed while Texas holds commitments from the No. 1-ranked JUCO tight end in Dominick Wood-Anderson and from an in-state 4-star in Malcolm Epps.

Defensively, Texas is set at linebacker with in-state 3-star Byron Hobbs and 4-star middle linebacker Ayodele Adeoye of IMG Academy. The same is true at safety where Texas holds commitments from a trio of star recruits in Foster, Sterns and 4-star DeMarvion Overshown.

Texas also is done at kicker with its commitment from Lake Travis’ Cameron Dicker.

What Texas still needs in 2018

Cornerback and defensive line remain the Longhorns’ two biggest needs for the 2018 class. Herman hopes the cornerback position is taken care of by the end of October. Green, the top-ranked player on the Fabulous 55, is already in the fold. Adding Jamison and Cook would give Texas the best secondary class in the country when taking the safeties and cornerbacks into account.

Defensive line is a murkier picture. Keondre Coburn, a 4-star defensive tackle from Spring Westfield, is Texas’ only defensive lineman currently committed. The Longhorns needs at least one more tackle and an end. Texas is chasing in-state defensive tackles like Bobby Brown and Chasen Hines. The Longhorns might need to go out-of-state to find a defensive end. Herman’s staff is targeting Ronnie Perkin and Daniel Carson, both from Missouri.

Offensively, Texas would like to sign one more receiver, an interior offensive lineman and possibly 4-star tight end Mustapha Muhammad, even though the Longhorns already hold a commitment from two tight ends. The leading candidates at receiver include Tommy Bush and Jaylen Waddle, but watch out for Converse Judson athlete Julon Williams, who could pick up an offer as a slot receiver soon.

The post Texas still has work to do in the 2018 recruiting class appeared first on Hook ‘Em.

Texas vs. Kansas State: A Q&A with a Wildcats beat writer