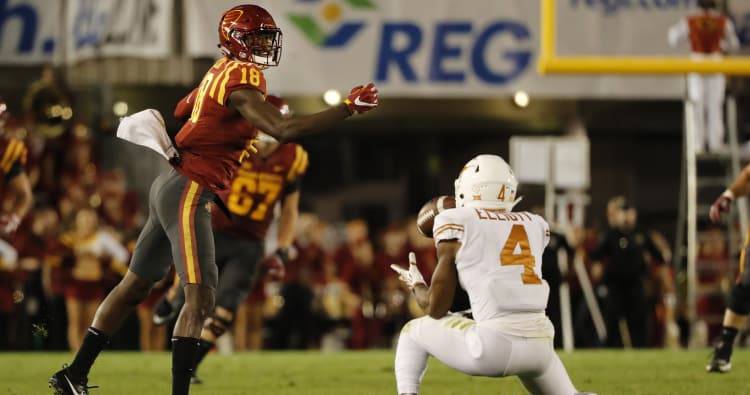 1. Which running back will get the most touches?

2. Will Texas continue to cash in on turnovers?

Thanks to three defensive touchdowns scored by Holton Hill and DeShon Elliott, the Longhorns’ seven interceptions have led to 31 points this season. Texas also got into the end zone three plays after its only fumble recovery. Mistakes by Kansas State, though, may be few and far between. The Wildcats have turned the ball over three times; only five teams in the country have fewer.

3. How will Texas’ defense fare on third and fourth down?

Texas is one of seven schools that have yet to allow a fourth-down conversion (opponents are 0 for 7 so far). Additionally, the defense ranks 11th on third downs (teams have converted 14 of 53 third downs into first downs). Linebacker Malik Jefferson said the key to success in such situations is to “stop the run.” That strategy will be tested: Kansas State averages 229.0 yards per game on the ground. Last year against Texas, the Wildcats were 5 of 13 on third-down conversions and 2 of 2 on fourth downs.

4. Will Texas get the ball to Collin Johnson?

In Johnson, Texas quarterbacks have a 6-6, 220-pound security blanket that torched USC for 191 receiving yards. Johnson, though, had quiet two-catch outings against San Jose State and Iowa State. His only touchdown this season came during garbage time in the loss to Maryland. Can Johnson find success against a Kansas State secondary that ranks 34th nationally against the pass and will start cornerbacks D.J. Reed and Duke Shelley?

Texas’ notable number: Time of possession — and the number 11