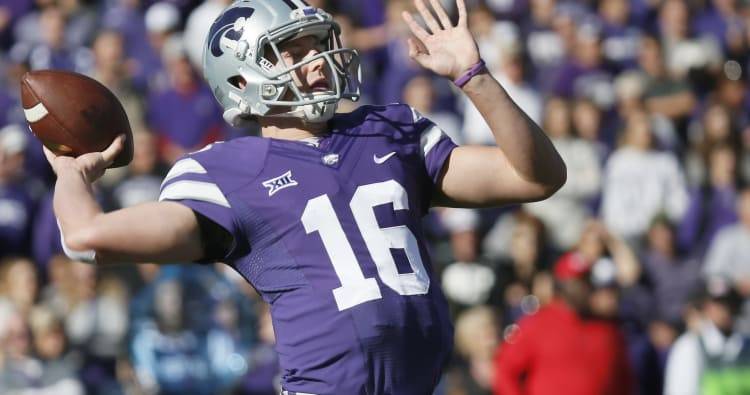 We’re interviewing the beat writer of Texas’ opponent each week this season. This week, it’s Kellis Robinett (@KellisRobinett) of the Wichita Eagle and Kansas City Star offering his insight on the Kansas State Wildcats.

1. Kansas State was ranked until the 14-7 loss to Vanderbilt on Sept. 16. Would you expect the Wildcats to return to the rankings this season?

The next three games will probably answer that question. K-State heads to Texas and then hosts TCU and Oklahoma over the next weeks. If the Wildcats win two of those games, they will jump back into the rankings and probably stay there the rest of the season as the schedule softens. If they go 1-2 or 0-3, it will be difficult for them to rejoin the top 25.

2. Since he ran for two scores last year, Texas fans know enough about Jesse Ertz’s legs. How concerned should they be with his arm?

Three weeks ago I would have said Ertz could hurt Texas with his feet and his arm, but his last two games have not been encouraging. He has completed 17 of 45 passes for 185 yards, a touchdown and two interceptions against power-conference opponents. K-State receivers are dropping passes at an alarming rate. I imagine Texas will dare him to throw on Saturday.

3. Kansas State ranks among the nation’s best with its rush (33rd) and pass (34th) defenses. Which has impressed you more this season?

K-State has been good in both areas, but it has looked best against the run. Outside of 74-yard touchdown spring from Baylor running back John Lovett, they have more or less dominated the line of scrimmage. Defensive line seems like the strength of the defense.

4. Was that loss at Vanderbilt a simple slip-up or a sign of future problems for the Wildcats?

The jury is still out, but the passing game didn’t take much of a step forward against Baylor. A lot of things haven’t gone as expected this season. Most assumed the offense would dominate, while the defense did just enough to preserve victory. It’s been the exact opposite. The Texas game might answer a lot of questions.

5. Name one Kansas State player that Texas fans aren’t talking about — but should be.

Kendall Adams. The junior defensive back has intercepted two passes, recovered a fumble and scored two touchdowns this season. He is the Wildcats’ biggest turnover threat on defense.

6. Finally, you’re an Austin native. Any restaurants or spots you’re looking forward to returning to this week?

Aaron Franklin makes the best barbecue in the world, so I was sorry to read about the fire at his restaurant. But there are so many other great places. El Arroyo, Juan in a Million, Phil’s Ice House, Amy’s, Terry Black’s Barbecue, Kerbey Lane Cafe, The Salt Lick … Wish I had enough time to eat at all of them.

The post Texas vs. Kansas State: A Q&A with a Wildcats beat writer appeared first on Hook ‘Em.

Texas still has work to do in the 2018 recruiting class