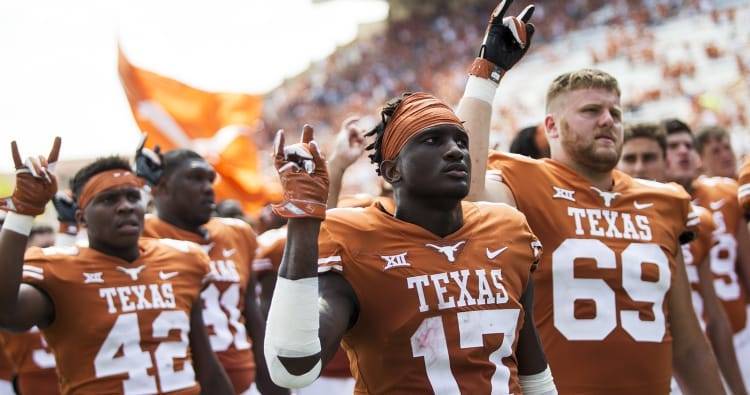 When Texas takes the field to play Kansas State on Saturday, it will have been 28 days since the Longhorns last hosted a game inside Royal-Memorial Stadium. Since a 56-0 win over San Jose State on Sept. 9, Texas has gone 1-1 in road games at USC and Iowa State.

The Longhorns (2-2, 1-0) will hope support from their passionate fans makes a difference in a crucial Big 12 game. The Wildcats (3-1, 1-0), fresh off a win over Baylor last weekend, are also looking to remain unbeaten in conference play.

Find game time, TV channel and information about how to watch online below.

Weather: The forecast calls for a high temperature of 87 degrees in Austin on Saturday with an overnight low of 69. Sunset is at 7:08 p.m., and mostly cloudy skies are expected.

The line: Texas is a 3.5-point favorite to beat Kansas State.

Which TV channel is Texas-Kansas State on?

The Texas-Kansas State game in Week 6 is on Fox Sports 1. Justin Kutcher (play-by-play), Mark Helfrich, Petros Papadakis (analysts) and Shane Bacon (sideline) will be the announcers.

How can I watch Texas-Kansas State online?

The game between Texas and K-State can be viewed online via FOXSportsGO.com and the FOXSportsGO app.

How can I listen to the Texas-Kansas State game on the radio?

The Texas-Kansas game in Week 6 will air live on the Longhorn IMG Radio Network. In Austin, the local radio affiliate is 104.9 The Horn. A full list of Longhorns radio affiliates can be found here, or you can click the play button below to listen online.

Since the Big 12 was founded in 1996, no team has given Texas more consistent fits than K-State and its venerable coach Bill Snyder who turns 78 on Saturday. The Wildcats are 10-7 all time against the Longhorns, including a 24-21 victory last year in Manhattan. Snyder’s teams are 7-4 against UT and 2-3 at Royal-Memorial Stadium. However, home teams have won the past five meetings since K-State’s last win in Austin in 2011.

During its past three games, Texas has established that it can stop the run. Entering the game Saturday, the Longhorns rank 17th in FBS in rushing yards allowed per game at 96.5. They will face their stiffest test since the season opener — when they allowed Maryland to rush for 263 yards in a 51-41 loss.

Kansas State ranks 27th in the country in rushing yards per game with an average of 229 yards per outing. Quarterback Jesse Ertz leads the team with 332 yards on 56 carries, and running back Alex Barnes has 242 rushing yards on 46 touches. Last year, Ertz ran for 78 yards and two touchdowns while passing for 171 yards and a score to beat UT. Whoever wins out between the Wildcats’ physical rushing attack and Texas’s solid front seven could go a long way in determining who wins on Saturday.

While the Texas defense has excelled, the offense has had its struggles in games against USC and Iowa State. With quarterback Shane Buechele out against the Trojans, freshman Sam Ehlinger led a late comeback but turned the ball over four times — including a costly fumble in the second overtime. Last week, Buechele led UT to 312 total yards and only a field goal after halftime.

RELATED: Can a platelet injection into Shane Buechele’s ankle cure the Texas offense?

Buechele sustained an ankle injury in the 17-7 win, and some Texas fans are pulling for Ehlinger to at least receive more playing time. Also absent is a consistent running game. Chris Warren III has averaged 29.5 yards the past two games. Can the Longhorns establish some rhythm against the Wildcats, who rank 21st in total defense (308.5 yards allowed per game)?

The Eyes of Texas: 3 Wildcats the Horns will be watching