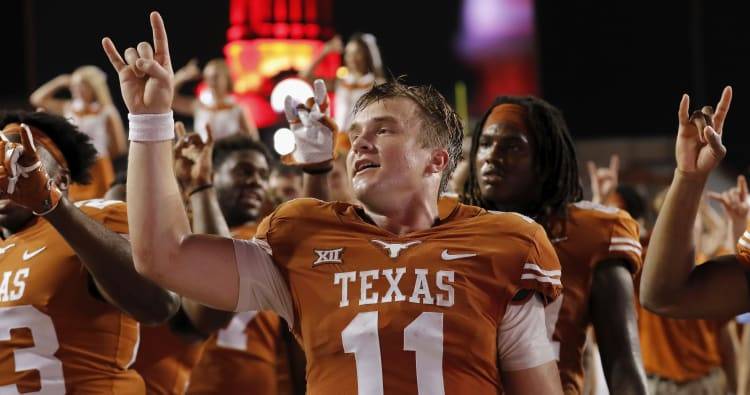 Texas Longhorns quarterback Sam Ehlinger had himself some evening on Saturday against Kansas State.

Technically the backup quarterback, the freshman filled in for the injured Shane Buechele and in doing so, willed Texas to a 40-34 double-overtime victory over the Wildcats to push the Horns to 3-2 on the year and 2-0 in Big 12 play.

In the process, Ehlinger put on the kind of offense display that hasn’t been seen from the quarterback position in Austin in recent memory, resulting in the Austin native earning honors as the CBS Sports Freshman of the Week.

“If there was any doubt before, there shouldn’t be now. Ehlinger has proven himself in three starts as Texas’ starting quarterback. The Longhorns’ 40-34 double overtime win over Kansas State might have sealed the deal even though Ehlinger has been Texas’ backup by definition. Ehlinger was 30-of-50 passing for a career-best 380 yards and two touchdowns. His arm strength to push the ball down field, coupled with his mobility, has opened up Texas’ offense in a way that it hasn’t looked like in years. For a first-year player, his confidence is through the roof and the rest of the team feeds off of it.”

As noted, Ehlinger finished with a career-high 380 yards through the air after completing 30 of 50 attempts. Such an effort stands as the best true freshman passing performance in school history and marks the most passing yards by any Longhorns field general since Colt McCoy poured 397 yards on the Kansas Jayhawks in 2009.

Furthermore, Ehlinger put his dual-threat label to good use, utilizing his legs to keep plays and drives alive to the tune of 107 yards on 20 carries. When it was all said and done, Ehlinger’s 487-yard offensive onslaught placed him alongside Vince Young and Jerrod Heard as the only two quarterbacks in school history to pass for at least 300 yards and rush for another 100 yards in a single game.

The Horns collectively enjoyed the benefits of such extensive productivity, as well, as Texas’ 40 points against Kansas stand as the most the offense has contributed to the scoreboard this season.

Ehlinger has now completed 66 of 117 attempts as a freshman for 900 yards and 5 touchdowns, along with 3 interceptions. Texas is 2-1 with Ehlinger as the starting quarterback.