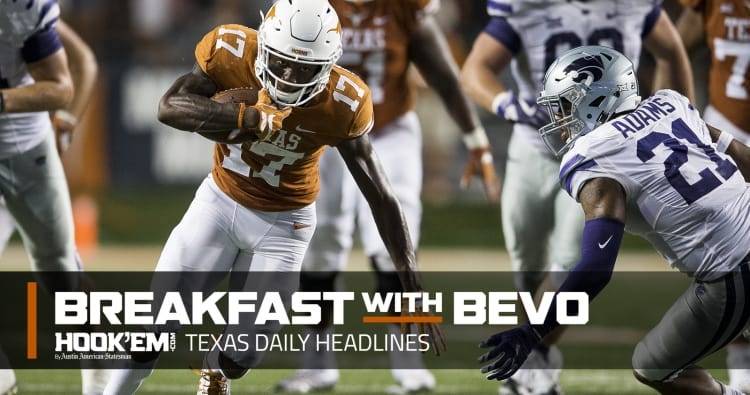 The Red River rivalry week is here. Texas and Oklahoma will square off for the 112th time at the Cotton Bowl on Saturday. After Texas’ win over Kansas State on Saturday, the Longhorns finally find themselves with a winning record this year. After starting out the season 4-0, Oklahoma suffered an upset loss to Iowa State on Saturday – the same Cyclones team Tom Herman’s squad dispatched a couple of weeks ago. Hookem.com’s Brian Davis why this week’s game week now looks totally unpredictable.

Redshirt-freshman Reggie Hemphill-Mapps paced a deep receiving corps in UT’s 40-34 win at Royal-Memorial Stadium. He had 121 receiving yards, but it was his 12 receptions that stood out on the stat sheet. Those 12 catches set a school record for freshmen.

Hookem.com’s Danny Davis puts together his five key plays from the game on Saturday that were key to the Longhorns’ win. A couple turnovers are featured in his list, along with the work of one Texas running back.

Ehlinger named freshman of the week

After leading Texas to the win over Kansas State on Saturday, Texas freshman quarterback Sam Ehlinger was named CBS Sports’ national freshman of the week. “For a first-year player, his confidence is through the roof and the rest of the team feeds off of it,” the website said.

The post Are both Oklahoma and Texas football programs headed in the same direction? appeared first on Hook ‘Em.

Off the ‘roller coaster of emotion,’ Reggie Hemphill-Mapps climbs into UT’s record books