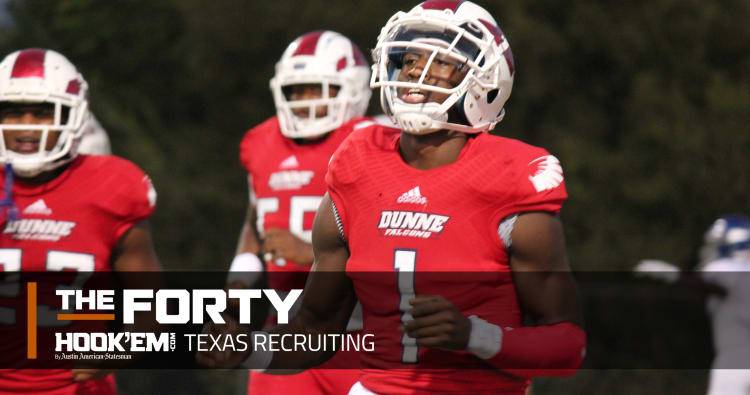 The trio of safeties committed to Texas in the 2018 class stack up with any team in the nation. B.J. Foster is a 5-star talent, while Caden Sterns and DeMarvion Overshown both rank as 4-star prospects and also on the Fabulous 55.

Tom Herman hopes to add more playmaking ability to the safety room in 2019 and the top target on the board is Brian Williams, a 5-star safety from Dallas Bishop Dunne. The 6-foot, 185-pound safety ranks is the top-ranked player in the Next 25 and the No. 7-ranked player in the 2019 class, per the 247Sports composite.

“I love coach Herman and his staff,” Williams said Friday night after Bishop Dunne’s win over Fort Worth Nolan Catholic. Williams registered an interception in the game. “Each time I’ve gone to Austin, it’s been a great visit. I look forward to going to Austin more, building our relationship and seeing where it goes from here.”

Williams wants to be an engineer. It was the first thing he talked about when asked what he wants from a college. He narrowed his list of offers to a top six — Texas, Notre Dame, Stanford, Arkansas, Oklahoma and Nebraska.

“I needed to narrow down my offers so I could concentrate on a smaller amount of schools and really do my research,” he said. “It’s all about relationships and trust. I have a while to go until I sign a national letter of intent. I’m taking my time and focusing on my junior season.”

Williams will be at the Cotton Bowl for Saturday’s Texas-Oklahoma game.

Williams isn’t the only 2019 Texas target at Bishop Dunne. Beason, a 4-star athlete also ranked on the Next 25, listed Texas among his top schools. Beason plays wide receiver and quarterback for Bishop Dunne. He’ll likely play wide receiver or in the secondary as a college athlete.

“I don’t care where I play on the field as long as I’m playing,” Beason said. “I hope my versatility is what makes me one of the top prospects in the country. I think I can play almost anywhere on the field, even defense. It’s all about what the team needs.”

Beason holds more than 30 offers but narrowed them down to Texas, Arkansas, Washington, Illinois, Oklahoma and Nebraska. Williams and Beason talk about attending the same school, but also know the best fit for one might not be the best fit for the other.

“We talk about it,” Beason said. “It’d be cool. We’re good friends and know each other well. It’s a long process and we’re just trying to keep it all in perspective and figure out the best option.”

Herman is proving he doesn’t want offers from Texas to be meaningless. He’s offered fewer than 40 juniors in the 2019 class. Texas wants to be picky in the recruiting process. This early, the staff can take its time and make each offer count.

That doesn’t mean the offer list won’t grow. Texas has offered both Bishop Dunne prospects, but there were two players on the losing side of Friday night’s game who could earn offers down the road.

Next 25 member Nana Osafo-Mensah and Nolan Catholic linebacker Chance Cover impressed in the loss. Osafo-Mensah is the No. 7 ranked player on the Next 25 and a 5-star defensive end who ranks No. 71 as a national prospect in the 2019 class. He holds 16 offers, including Texas A&M, UCLA and LSU.

Cover has yet to pick up an offer, but the 6-2, 220-pound playmaker’s stock should rise following his junior season.

Are both Oklahoma and Texas football programs headed in the same direction?