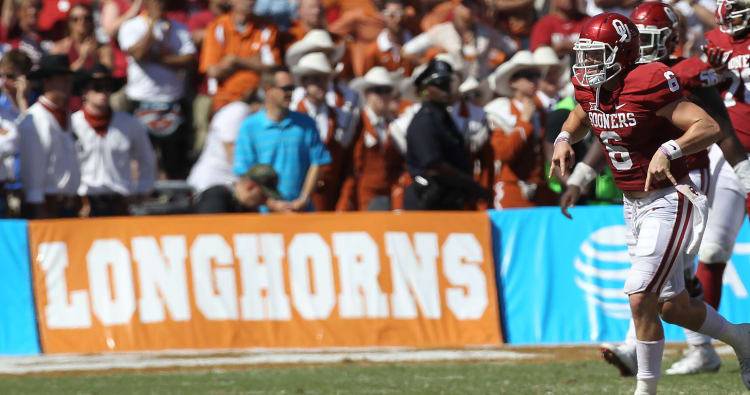 On Saturday at the Cotton Bowl, Oklahoma quarterback Baker Mayfield will take his fourth and final shot at Texas.

A member of Lake Travis’ 2013 graduating class, this will mark Mayfield’s fourth start against his hometown team. Mayfield played at Texas Tech during the 2013 season. After transferring to Oklahoma in 2014, this is his third year directing the Sooners’ offense.

In his three previous starts against Texas, Mayfield has thrown for 838 yards, four touchdowns and three interceptions. In addition to completing 66 of his 103 passes, Mayfield has run for a four-yard score.

Mayfield is 1-2 in those games against Texas. The Red Raiders were routed 41-16 in 2013, and Oklahoma was dealt a 24-17 defeat in 2015. Last year, however, Mayfield led the Sooners to a 45-40 victory. When asked this summer at the Big 12’s media days about evening his record against Texas, Mayfield said “It’s obviously important to win that rivalry.”

Not many quarterbacks get four tries to topple Texas. In fact, you’ll have to go back to 1997 to find two quarterbacks who logged four starts against the Longhorns:

Boykin went 3-1 as TCU’s starter with that lone loss coming in a 2013 game in which he moved to receiver after the game’s second possession. Boykin completed nearly 61 percent of his 82 passes against Texas. He showcased his arm in 2015 when he threw for 332 yards and five touchdowns in a 50-7 blowout. In 2012’s 20-13 win, he led the Horned Frogs with 77 rushing yards.

Texas’ leading passer during the 2014 and 2015 meetings was Tyrone Swoopes. Boykin and Swoopes are currently both members of the Seattle Seahawks’ practice squad. Swoopes transitioned to the tight end position following his exit from Texas.

Lindsay led Oklahoma State to a 42-16 win in his first meeting with Texas. The Longhorns, though, were the victors in the three follow-up dates. Lindsay only exceeded 200 passing yards in 1998’s 37-34 loss to UT. Texas also held him to 40 rushing yards after he ran for 126 yards and three touchdowns in that 1997 showdown.

Lindsay is currently a high school coach in Denver.