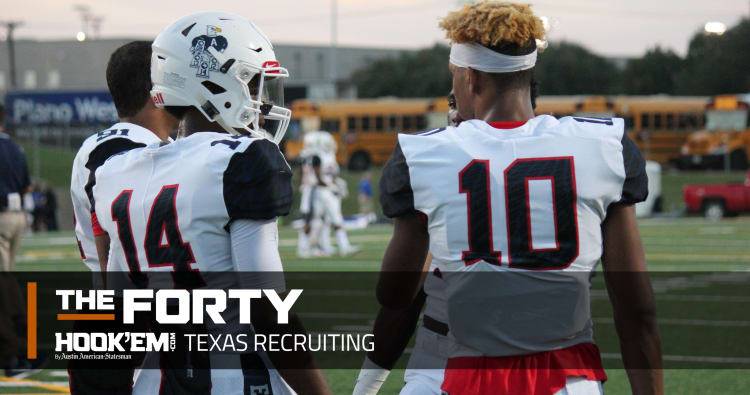 The state of Texas is becoming a market for wide receiver talent. The 2018 Fabulous 55 includes more than 10 receivers and the 2019 list will be represented by a similar amount of talent. Some of this is due to the influx of 7-on-7 in the state. It’s also due to the need of multiple wide receivers in modern offenses.

Seven of the Next 25 members project as wide receivers in college, including four of the top 10 players on the list. Theo Wease, a 5-star prospect from Allen, ranked as the No. 4 player on the Next 25. The junior made his case to become the top-rated receiver in the 2019 class when he scored three touchdowns in a 59-0 win over Plano West on Friday night.

“I want to be considered one of the best, if not the best player in the state. That’s my mindset in every practice and every game,” Wease said. “If I’m playing at my best, then I’m doing what is needed to help my team win. There are expectations on us at Allen each season and that challenges me to always play my best. We’re judged on consistency.”

Wease is a 6-3, 189-pound prospect with nearly 30 offers. He ranks as the No. 21 2019 prospect in the nation and the No. 3-ranked wide receiver in his class, per 247Sports Composite. Wease will attend Saturday’s Red River Rivalry game when Texas takes on Oklahoma.

He put out a top 14 list that included Texas and Oklahoma, though the Sooners are considered the favorite right now. It’s a long time until Wease signs a national letter of intent.

“My main focus is on my junior season and this Allen team,” he said. “Recruiting is important and I’ll be doing some visits and more research on each school. I’m excited to learn more about each school and really get to know all of the coaches at my favorite schools.”

Through five weeks, Wease has 22 catches for 288 yards and six touchdowns. He indicated that he plans to narrow his list further in the spring and that Texas should expect to make the cut.

The quarterback job at Allen is a double-edged sword. The positives include a bevy of talented teammates, all the resources a high school athlete could need and a sound coaching staff with experience at winning state championships. The negatives include the pressure and the expectations that come with that position.

Grant Tisdale, a 4-star dual-threat quarterback in the 2019 class, knew it was his time to drive the Allen offense. It’s a position made famous by Kyler Murray and his three straight state championships and perfect record as a starter.

Tisdale understood the pressure. He was pegged as the starter throughout the offseason and received Power 5 offers before he even started a game on the varsity level.

“Grant does a great job of focusing on what is important,” Allen coach Terry Gambill said. “As a player, you must focus on practice. You have to focus on games. You can’t let the outside distractions and hype distract you from the goal of winning football games and leading the team. The attention and offers and star ratings come with the success.”

Tisdale ranked No. 25 on the Next 25, joining Allen teammates Theo Wease and offensive lineman EJ Ndoma-Ogar, who checks in at No. 24. All three plan to attend Saturday’s game. Tisdale visited Texas multiple times in the offseason.

Texas’ only 2019 commitment is Port Neches-Groves quarterback Roschon Johnson. The Longhorns hold commitments from two 2018 quarterbacks, raising doubt whether they’ll search for another quarterback for 2019. If Texas does go after a second quarterback, or if Johnson was to de-commit, Tisdale seems like the obvious choice.

“I’ve always enjoyed my times visiting Texas and talking with coach Herman,” Tisdale said. “There will be competition no matter where I go play college football, so I try not to worry about who is committed where or who is on the depth chart.”

The refinement of an offensive lineman takes time. It’s why a true freshman contributing in the trenches is rarely a pleasant site for coaches. Ask Tom Herman right now. The Longhorns do have a plan for the future and two pieces of the puzzle are in place for the 2018 class with future offensive tackles Rafiti Ghirmai and Reese Moore in the fold.

Texas has yet to find an interior lineman in the class.

The same is true for 2019. The targets are clear at tackle with the Longhorns eyeing current LSU commit Kenyon Green at tackle along with fellow in-state options Tyler Johnson and Javonne Shepherd.

The picture at guard isn’t clear. Branson Bragg is Texas’ top target at center, but only one guard prospect — Kardell Thomas (La.) — holds a UT offer. Ndoma-Ogar might earn one down the road if he continues his development. The 6-2, 305-pound 4-star prospect holds 22 offers, but not one from the Longhorns.

“Recruiting is going really well. I’ve picked up new offers from schools like Penn State and those are big time offers,” Ndoma-Ogar said. “Texas hasn’t really told me much about the offers. There is still a little bit of interest if the contact picks up.”

Is the wrong team favored in this Texas-Oklahoma matchup?