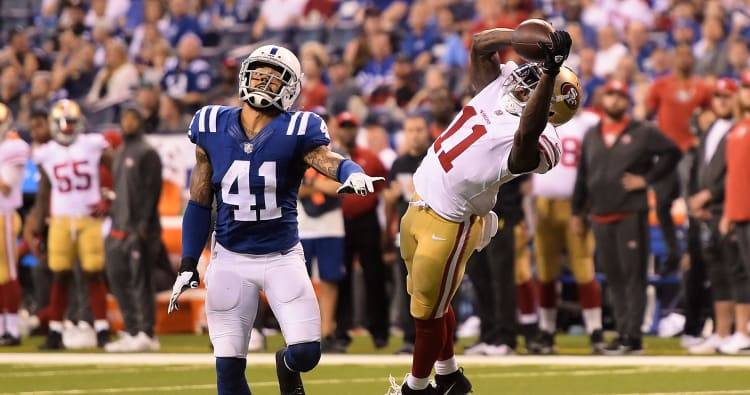 Marquise Goodwin followed up a tough game against the Cardinals with a possible breakout performance against the Colts. The 49ers receiver had five catches for 116 yards in the 26-23 loss to the Colts. Goodwin is playing for a former Longhorn in Kyle Shanahan. The speedster was tied for the most targets, signaling an increased role for San Francisco.

Derrick Johnson and the Chiefs remained undefeated as they topped Houston 42-34 on Sunday Night Football. Johnson made five tackles in the win and recovered a fumble, coincidentally by another former Longhorn, D’Onta Foreman.

Earl Thomas had another strong outing for the Seahawks as he made seven tackles, an interception and forced a fumble in the 16-10 win over the upstart Rams. Thomas prevented Todd Gurley from scoring on the opening drive by forcing a fumble as Gurley stretched for the end zone. The play resulted in a touchback for the Seahawks.

Adrian Phillips, CB, Chargers—Phillips led the Chargers with eight tackles in the 27-22 win over the Giants.

Sam Acho, LB, Bears—Acho had four tackles in the Bears’ 20-17 loss to the Vikings on Monday night.

Jordan Hicks, LB, Eagles—Hicks had four tackles as the Eagles trounced the Cardinals 34-7.

Justin Tucker, K, Ravens—Tucker missed a 62-yard attempt in Week 4, but he was perfect on Sunday. He was 3-for-3 on field goals while making all three extra-point attempts.

D’Onta Foreman, RB, Texans—He had four carries for 34 yards and made a catch for three yards. He also lost fumble.

Brian Orakpo, LB, Titans—Orakpo made three tackles, but the Titans still fell to the Dolphins 16-10.

Quandre Diggs, CB, Lions—Diggs and the Lions fell to the Panthers 27-24. Diggs finished with three tackles.

Keenan Robinson, LB, Giants—He made three tackles in the 27-22 loss to the Chargers for the winless Giants.

Roy Miller, DT, Chiefs—Miller had a tackle as the Chiefs topped the Texans.

Marcus Johnson, WR, Eagles—Johnson recorded his first career catch in the Eagles’ win over the Cardinals. The play went for six yards.

Brian Robison, DE, Vikings—Robison had one tackle as the Vikings were able to hold off the Bears on the road.

Phil Dawson, K, Cardinals—Dawson was 0-for-1 on field goal attempts. His 51-yard attempt was blocked in the second quarter.

Hassan Ridgeway, DT, Colts—The defensive tackle made a tackle in the 26-23 win over the 49ers.

Trey Hopkins, OG, Bengals—The former Longhorn returned to action after it was feared he’d be lost for much longer. He played in 43 offensive snaps on Sunday as the Bengals defeated the Bills.

Fozzy Whittaker, RB, Panthers—He didn’t record a stat in the win over the Lions.

Colt McCoy, QB, Redskins—McCoy and the Redskins were on bye in Week 5.

Jamaal Charles, RB, Broncos—Charles and the Broncos were on bye in Week 5.

Kenny Vaccaro, S, Saints—Vaccaro and the Saints were on bye in Week 5.

Alex Okafor, DE, Saints—Okafor and the Saints were on bye in Week 5.

Lamarr Houston, LB, Texans—Houston was signed on Tuesday to help the Texans deal with the loss of J.J. Watt.

Dede Westbrook’s thankfully long gone, but the Texas secondary is eager for redemption