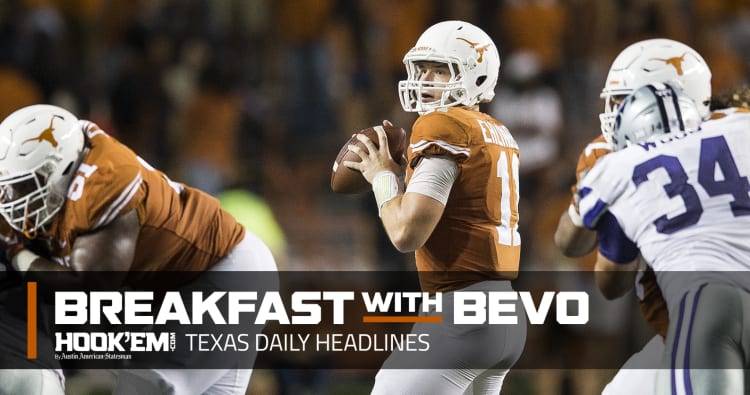 Sound Off: The Red River Showdown

It’s that time of year again. Time for the Red River Showdown, the annual matchup between Texas and Oklahoma at the Cotton Bowl. Texas beat writers Brian Davis and Danny Davis preview the game in this edition of Sound Off. They talk about the pageantry of the game, the quarterback situation and the fact both schools have a first-year head coach.

After giving up a school record 232 receiving yards to Dede Westbrook in the 2016 Red River Showdown, the Longhorns are eager for redemption. Westbrook is catching passes for the Jacksonville Jaguars now, but Baker Mayfield is still around. DeShon Elliott has 5 interceptions in his last three games, giving Texas a reputation for making plays in the secondary this season. With that comes more confidence.

Austin American-Statesman columnist Cedric Golden thinks Tom Herman is playing a game within a game by not announcing his starting quarterback against Oklahoma. Golden, and much of the football fan base, thinks it’s clearly going to be Sam Ehlinger after a tough double overtime win against Kansas State last weekend.

In this column on current NFL linebacker, Derrick Johnson, Golden thinks this is the former Longhorn’s best opportunity to win a Super Bowl.

Three juniors from Allen high school will attend the Red River Showdown this weekend. Recruiting writer Mike Craven breaks down the trio of players in the class of 2019. Texas currently has one commitment from the Class of 2019: quarterback Roschon Johnson from Port Neches-Grove.

The Oklahoma quarterback enters a rare group on Saturday as he becomes one of a handful of signal callers to make four starts against Texas. He’s currently 1-2 against the Longhorns, falling in 2013 as a member of Texas Tech and in the 2015 upset. He outlasted Texas last season with a 45-40 win.

The Texas freshman quarterback was honored Tuesday for his win against Kansas State. Ehlinger threw for 380 yards and rushed for another 107 to lift the Longhorns to a double-overtime win. He’s just the third Longhorns player in the last 20 years to throw for more than 300 yards and rush for more than 100 in a game.

The traditional torchlight parade ahead of the game on Saturday against Oklahoma has been cancelled by the Texas alumni group. Students will still walk to the main mall south of the UT Tower to hear Herman speak.

What would a commitment from D’Shawn Jamison mean for the Longhorns?