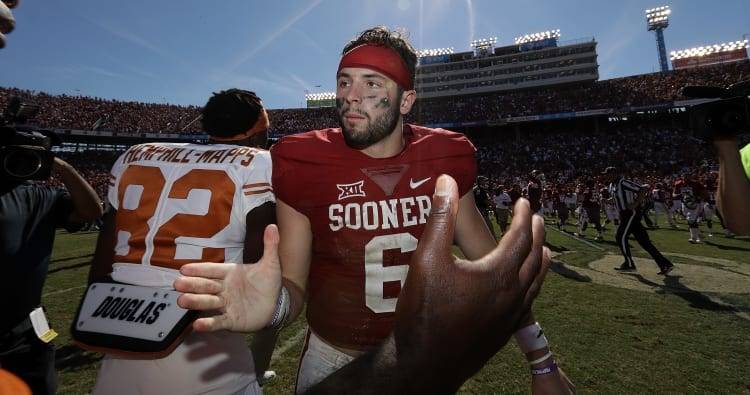 Every week when I compile the Whys of Texas mailbag, I’m looking for thoughtful, well-reasoned messages from any and all Longhorns fans.

Sometimes, the material is what it is. Such is the case when the subject matter is Texas-Oklahoma.

The Longhorns (3-2, 2-0 Big 12) are feeling good after two wins. The 12th-ranked Sooners (4-1, 1-1) are coming off an embarrassing loss to the same Iowa State Cyclones that the Horns dissipated earlier in Ames. This will be OU quarterback Baker Mayfield’s last chance to knock off Texas. He’s 1-2 against the Longhorns, counting his time at Texas Tech and OU. He’s planted a crimson flag in the Cotton Bowl and in the Horseshoe in Columbus, Ohio.

Safe to say Texas fans do not want to see that happen again on Saturday.

I know I not supposed to say this and I wish him no permanent life-changing harm . But if he could just get hit one good time legally, and it hurts real bad, I wouldn’t be very sympathetic ! It’s 6:54 p.m. Central time and OU STILL SUCKS!

Well, at least Scotty does not wish Mayfield any permanent life-changing harm.

He needs to keep his comments to himself! Sounds like an Aggie quarterback, that now doesn’t play.

This was in response to Mayfield’s comment that Texas quarterback Sam Ehlinger never beat Lake Travis. That stirred up a hornet’s nest in my Twitter mentions this week.

Let him talk. Don’t talk down on him, because karma is an ugly bitch. Let’s just settle it on the field Saturday afternoon. Hook ’em, Horns.

Karma is me always buying too many of those stupid Midway tickets for the concession stand. If memory serves, you can get two Fletcher’s corny dogs and a beer for less than $20. You can always catch the Austin and Oklahoma City media contingents at the Fletcher’s stand outside the Cotton Bowl’s main gate about 2-3 hours after the game — after our deadlines.

I can’t wait to see that burnt orange stabbed in the middle of the field. Texas needs to knock OU out of the top 25.

This seems like a fascinating prop bet in Las Vegas. If the Longhorns win, who would you pick to plant the Texas flag at midfield? Oh, we know Mayfield will be all over that if the Sooners win.

Meanwhile, multiple Texas fans sent in messages saying they were fine with UT coach Tom Herman not naming Ehlinger as the starter during Monday’s press conference. It’s now the worst kept secret in Bellmont. Quick aside: OK, fine, the Moncrief-Neuhaus Athletic Center for you longtime Bellmont watchers who email me to shout, “The athletic offices aren’t in Bellmont anymore!” I’ll probably go to my grave using the slang terminology of “Bellmont” to refer to the Texas athletic administration. Yes, I know if you are under 40, this is likely too much inside baseball.

Anyway, I fully expect Ehlinger, the freshman from Westlake, to start against the pride of Lake Travis in what should be an epic battle of Central Texas prep stars.

Ehlinger’s running ability gives the offense a new wrinkle that is simply not there with Buechele. That was apparent against USC and in the 40-34 double-overtime win over Kansas State. Ehlinger ran for 107 yards on 20 carries and literally ran through a Kansas State defensive back.

It’s not a novel concept for freshmen to play in this game. James Brown, Major Applewhite, Vince Young, Colt McCoy and Jerrod Heard were all redshirt freshmen in their Cotton Bowl debuts. Buechele was a true freshman last season when he faced the Sooners. Herman doesn’t believe in getting caught up in a player’s age. You can either play or you can’t. That’s why he’ll have no qualms about unleashing Ehlinger in the Cotton Bowl.

It blew my mind that Ehlinger didn’t start, much less play vs Iowa State. Does the coaching staff really believe Shane could have pulled the USC game out with a touchdown in the last few seconds? Ehlinger can’t help the fact the defense blew up in the final seconds of the first and second half. And the kid kept them in the game through double OT. Shane will lose a lot of games. The younger kid is just plain better and it is obvious. What am I missing?

I think a majority of Texas fans felt that way, Bill. Look, this quarterback situation is delicate for Herman and his staff. He simply cannot bench Buechele and write him off. The prediction here is that Buechele will save this team’s bacon at some point again this season. The Longhorns have only two scholarship quarterbacks. Herman cannot afford to mentally write off either of them.

If Texas Longhorns quarterback Sam Ehlinger, is buying sweet treats about Saturday’s football win over Kansas State. I can only imagine what he has in mind for a victory over Oklahoma, on Saturday afternoon in the “Cotton Bowl.”

A UT staff member tweeted a photo of Ehlinger with right guard Jake McMillon on Monday. It appeared that Ehlinger brought boxes of glazed doughnuts for his blocking buddies that protected him against K-State. Talk about a savvy move. But let’s talk about that offensive line for a second. Derek Kerstetter and Denzel Okafor were the starting tackles. Terrell Cuney had to step in at center for Zach Shackelford, who is battling an ankle injury. That group did not allow a single sack while the rushing game, fueled mostly by Ehlinger, piled up 166 yards. Herman will take that all day long. Kudos to UT offensive line coach Derek Warehime for keeping his unit together through all the injuries and personnel changes.

This coach is better than most because he makes decisions based on performance and effort, not favorites or friends. You also have to trust the system to a degree or maybe you are not in the right system for you. Foreman has talent, but so do the others.

Coach Herman is the Head Coach not Foreman’s Dad. His call on who plays. Go Coach!

Contrary to public opinion, Foreman was not suspended against K-State. He was listed on the participation sheet but did not play on offense. Afterward, Armanti’s father Derrick had quite the night on social media. The proud father blasted Herman on Facebook and hinted that Armanti was getting benched for tweets. That sounds ridiculous. Foreman has a team-high three touchdown catches and Herman’s going to bench him for his father’s social media habits?

“I mean, he’s got to practice better and play better than Jerrod (Heard) and Reggie (Hemphill-Mapps), just like anywhere,” Herman said on Monday. “Why does Malik (Jefferson) play more than Gary (Johnson)? Why does Anthony Wheeler play more than Ed Freeman? I mean, I think we’re making this out to be a little bit bigger of a deal than it needs to be.”

I’m a lifelong Austinite/Longhorn fan and listen to The Horn most days while at the office. I’ve heard Coach Herman’s press conferences as well as many of your interviews on The Horn with B & E. You’ve been beating the Chris Warren drum all season. I’m not a football coach. Just an average Joe watching football on TV. But I’m having a hard time understanding why you are repeatedly clamoring for Chris Warren to get more carries.

A lot of folks are remembering how Warren ran against Tech last year. He was a beast! But that was against a horrible rush defense and honestly in an offense with a better run system. Chris can be a physical runner no doubt. But in my opinion, he’s a horrible blocker and doesn’t react to gaps fast enough. I don’t think he would make the scout team in Tuscaloosa. I just don’t see him being a great back (I sure hope I’m wrong).

My biggest issue with the running back situation is what appears to be the unpredictable rotation. Kyle Porter will get some carries, then come off the field. Chris Warren III will get some carries and then sub out. Toniel Carter showed some flashes against K-State, and then he came right off the field. This coaching staff can’t trust a single running back on an entire possession? “The biggest thing is nobody’s just taken it and ran with it, no pun intended,” Herman said. “So you’re going to continue to see that until somebody grabs a hold of it and goes.”

As for the USC finish, that loss should be pinned on the coaching staff for going away from Warren down the stretch. I don’t care that Ehlinger picked up 8 yards on first-and-10 from the USC 11 in double overtime. The next play, he fumbled. Give the ball to your 250-pounder and let him slam it up the middle. Look how that worked late against K-State.

On second down from the USC 3, who here thinks Warren and that offensive line couldn’t get three measly yards at that point in Los Angeles? And that’s with three chances, too, because the binder would have definitely said go for it on fourth down.

Failure to pay $500,000 within 10 business days for my world-class advisory services that made a huge difference and quickly transformed Tim Beck, the offensive staff and the Texas offense leaves me no choice but to aggressively pursue federal conspiracy charges as agreed. Thank you for your prompt attention to this urgent notice.

Props to you, Ish. This enterprising fellow sent me the emails that he sent directly to Herman and copied to UT President Gregory F. Fenves and the UT System Board of Regents. These were thorough. Ish suggested that Herman “use formations and plays that move the ball the easiest” and “dump loser formations.” He suggested the Longhorns “strategically blend” the 5-10 best running plays with the 10-20 best passing plays. “Pay for my advisory services to experience God’s blessings and I’ll refund it and double your UT contract,” Ish wrote to Herman. Hey, whatever works, right?

Have a question for the Whys of Texas? Send them to Brian Davis at bdavis@statesman.com.

The post The Whys of Texas: Fans hope to see OU’s Mayfield planted in Dallas appeared first on Hook ‘Em.

What would a commitment from D’Shawn Jamison mean for the Longhorns?