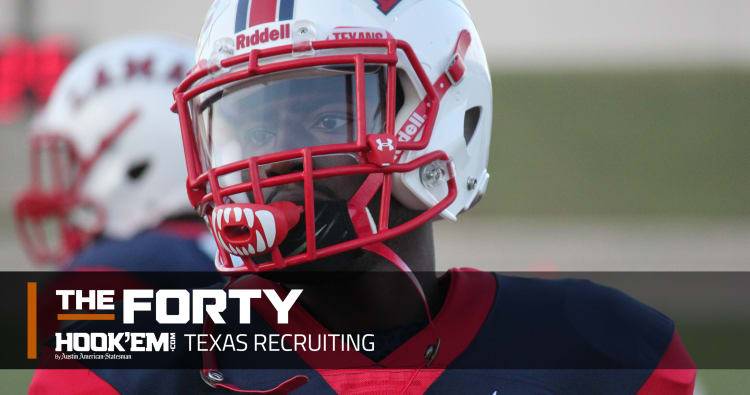 The Texas program went the entirety of September without picking up a commitment for the 2018 class. It was a whirlwind production during the summer months as the Longhorns moved to 18 commitments and rank as the second best recruiting class in the nation and the top-ranked class in the Big 12 with commitments from Malcolm Epps, Rafiti Ghirmai and more.

The 2018 class might add a new name Saturday when 4-star cornerback D’Shawn Jamison announces his college decision. The nickel cornerback prospect said earlier in the season that it was down to Texas or TCU.

“I want chances to go make plays on defense, offense and special teams,” Jamison said in September. “I don’t want to be known for one thing. I want to be known as a player who can do everything needed on the field to help the team win.”

Texas hopes to provide him that option. Jamison is offered as a cornerback, but the Texas staff has indicated to him that there will be opportunities to make an impact on special teams and even offense if Jamison’s talent dictate a few touches on that side of the ball.

Jamison, and Houston Lamar in general, is such a priority that Tom Herman took his helicopter to Dunbar Stadium on Sept. 22 to watch Jamison, Texas commit Al’vonte Woodard, and 5-star Texas target Anthony Cook. The effort made an impression on Jamison and Texas wants to cash in Saturday with a win over Oklahoma and a victory over TCU in the recruiting game by landing Jamison.

“It shows us that we’re important to Texas and to coach Herman,” Jamison said. “He wouldn’t be going through this to come watch us play even he didn’t want us. I think it is pretty cool.”

Texas’ lone cornerback commit is Houston Heights’ Jalen Green, the No. 1 player on the Fab 55. If Texas lands Jamison on Saturday as expected, all eyes at the cornerback position will shift to his teammate, Cook, who will decide between Texas and Ohio State on Oct. 28.

The possible impact on Anthony Cook

Houston Lamar is a school known for producing Longhorns. Former Longhorn Rod Babers hails from the school as does current starting cornerback Holton Hill. Herman’s staff already scored one point in the 2018 class by locking in Woodard, a 4-star wide receiver who qualified for The Opening Final in Oregon over the summer.

Jamison would be the next piece of the Houston Lamar trio that Texas hopes to pen on national signing day. Woodard and Jamison always felt like future Longhorns throughout the entire recruiting process, but that wasn’t necessarily true for Cook. The 5-star cornerback and No. 4 player on the Fab 55 was leaning toward Ohio State as of last month.

“I’m honestly still deciding,” Cook said on Sept. 25 after a game. “A week ago, I thought I had my mind made up. I have two more officials to go and after that I’ll be committing. I have a lot to pray about because I honestly don’t know right now.”

Since then, Cook took a visit to Texas that helped the Longhorns’ chances even more. Cook was in attendance for the Maryland game and walked away with Ohio State on his mind. Following performances against USC and two straight wins, the Longhorns are clearly back in the picture.

Woodard is busy letting Cook and Jamison know there is a place for all of them in Austin for the next four years.

“I work on them every day,” Woodard said after that same game in September. “I’m always in their ear about Texas and playing together in college. We’re all good friends so it is something we talk about.”

B.J. Foster will be honored Thursday

Texas safety commit B.J. Foster is a two-time participant of The Opening and he’ll get to add Under Armour All-American to his list of prep accomplishments on Thursday when The American Family Insurance Selection Tour rolls through Angleton High School at 10:20 a.m. to present him with his jersey for the game that takes place Jan. 4 in Orlando.

“It’s a great honor and a humbling thing for me and my family,” Foster said. “Not many players get these types of opportunities and I’m excited to get out there in Orlando and show what I can do against the best players in the country.”

Texas wide receiver target Tommy Bush, will receive his jersey during a ceremony on Wednesday afternoon.

The post What would a commitment from D’Shawn Jamison mean for the Longhorns? appeared first on Hook ‘Em.

The Whys of Texas: Fans hope to see OU’s Mayfield planted in Dallas