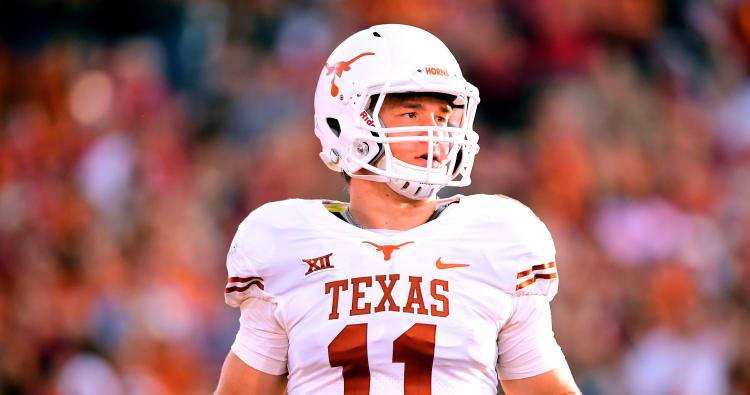 He’s going to get his shot on Saturday.

It seems like Texas coach Tom Herman and his staff are the only ones convinced by the idea they could pull the freshman, coming off a record-setting performance against Kansas State, in favor of sophomore Shane Buechele, who missed the K-State game with an ankle injury after returning the week prior against Iowa State.

Ehlinger’s first Red River game will probably his toughest. It’s his first rivalry game. He’s considered to be the next great Texas quarterback, but still only has three games played in his collegiate career.

Then there’s the small fact that he’s facing a wounded and more talented Oklahoma team, fresh off an upset at the hands of a four-touchdown underdog. OU still has legit national title aspirations. They will play angry.

Oh, and Ehlinger has to make sure his side keeps up with an offense orchestrated by a Heisman hopeful four seasons his senior.

What could go wrong?

The short answer is: a lot. But as you’ll see in the film breakdown, Ehlinger, moreso than Buechele, has shown he has the intangibles necessary to run Herman’s offense with precision, while also possessing special traits that he can use to exploit the Oklahoma defense

Tom Herman’s side uses a ton of switch releases (receivers crisscrossing at the line of scrimmage) to attack man and off-coverage. The freshman must be decisive in reading the release of his receivers and getting rid of the ball quickly.

It’s pretty simple: Push the ball into space, and let playmakers go do what they do after the catch.

As you’ll see, Ehlinger didn’t get the ball out quickly enough against USC. Some of that was on Herman and his staff. They didn’t build in as many quick timing concepts early in the game as they should have. Instead, they relied on Ehlinger attempting to hit home run shots early in the down and distance, rather than building in easier throws.

Texas will likely need its QB to hit three or four deep shots against the Sooners in order to pull off the upset. And the staff should be able to manufacture some decent matchups with receivers on safeties. However, the bulk of the offense needs to come from quick timing throws outside the numbers. As Iowa State demonstrated, that’s been a weakness for Mike Stoops’ group.

The Sooners are going to load the box to stop the run. Ehlinger must do a better job of processing information and getting the ball out on time.

He was much improved against Kansas State last week.

Herman and company built in half-field reads so that Ehlinger could pre-determine some throws by following a one-read key.

Texas used a series of trips formations — with tight wide receiver splits (they were all bunched close together between the hashmarks and numbers) —  in order to create instant separation for receivers through play-design, rather than relying on them all winning 1-on-1 battles.

They ran the design below over and over again: The outer most receiver cutting inside then pressing upfield. The slot receiver releasing flat across the formation. And the receiver in between using the outside receiver as a natural shield to get off the line of scrimmage unimpeded.

Ehlinger, for the most part, did a good job of checking his key and getting rid of the ball on-time.

But there was still some hero ball involved.

This is the same play-design later in the same quarter. Like the earlier example, Ehlinger should read his key, see the free release, get the ball out as he hits his back foot, and get on with the game.

He didn’t. Instead, he pulled the ball and looked to take-off with his legs. It was a positive gain, but an unnecessary play that put the ball and QB in harm’s way. The throw was there. Again. He should have made it.

It’s not just about the decision-making, though. It’s the decisiveness of the decisions. Pulling the ball and taking off is usually a better outcome than being a beat too late on a rhythm-based passing concept.

Too often the young QB has taken one or two beats too many before he’s on throws that are one-step drops. Texas uses a barrage of two-man switch releases to craft simple throws. The concept is basic: The outside guy releases inside, while the inside guy releases outside. Easy.

On two-man switches, Herman typically builds in a motion man in order to confirm the coverage to his quarterback — something that should speed up the process and take away the need to survey the field post-snap.

The one thing a quarterback cannot do on a quick switch is take too long to deliver the ball. Not even an extra beat. It’s begging a defensive back to undercut the route and take it to the house.

Here’s a good example from the USC game: It’s the same two-man switch concept as the one drawn above. A receiver motioned from one side of the field to the slot. The outside receiver released inside, the slot receiver released outside.

The motion confirmed man-coverage (the USC cornerback tracked the receiver across the field) and, given the cushion of the cornerback, the inside receiver got a free release at the line of scrimmage to crisscross with the outside receiver, springing him free to the flat.

The ball should have been out as the receivers crossed.

Yet Ehlinger seemed unsure. He was a tad off with his timing, and was fortunate the ball was batted down. By the time he released it, his receiver was standing around waiting for the throw. USC’s boundary corner was ready to shoot underneath the route and pick the throw pass, had it gotten there.

Still, there’s no doubt that Ehlinger has proven at times to be the more decisive of Texas’ two QBs on quick throws. Both Ehlinger and Shane Buechele are capable of hitting explosive plays downfield. But Ehlinger has shown more consistency as a rhythm passer.

Buechele holds onto the ball too long. He’s constantly looking to hit the highlight throw. Watch below as he passes up the quick out at the top of the screen (it’s open!), before working back to the near side on a delayed throw that was broken up.

Ehlinger has some of that in his game, too. He was outstanding overall against Kansas State. Yet against San Jose State, an inferior opponent, he spent the afternoon untouched, trying to hit moon shots — unnecessarily forcing the ball into double-coverage.

Against USC, he came under all kinds of fire. He got flustered early on and, again, forced the ball downfield when he didn’t need to. Against OU, he needs to find a happy medium. He will be pressured, quickly. In response, he needs to get rid of the ball quicker.

Decisiveness will be the key. Let the play design do the work. The yards, stats, and highlights will follow.

“He still has to fix a few things,” Texas offensive coordinator Tim Beck said this week. “You know what I told him? You play fast. That’s what I liked. He made a decision and he lived with it — whether it was right or wrong. He probably had some throws that he could have thrown instead of running. But he played fast and he made plays. I don’t want to take that away from him. I want him to continue to do that.”

He’s not perfect, but, to this point, Ehlinger has been the more decisive thrower. It’s why he will should against Oklahoma, whether Buechele is struggling with an injury or not.

“Sam is a tough, tough kid,” Herman said earlier this week. “He’s made a lot of freshman mistakes. There’s certainly a lot of room for improvement. But those mistakes he overcomes with tenacity and toughness.”

On early downs, Ehlinger needs to play within the structure of the system. Herman is an all-time great coaching underdog for a reason: He designs specific plans that expose oft-overlooked flaws in the favorite.

But once third down rolls around, anything goes. That’s when it’s time for Elhinger to break the structure of the system and go make some plays, the way Mayfield undoubtedly will against the Longhorns defense.

Elhinger’s shown the speed and toughness to take-off and be an open-field runner on designed QB-run concepts — or, even better, when he’s put into an empty backfield and is able to pull the ball instantly and punish a defense that has vacated the box.

Check out Herman using a split-blocking design inside, and pushing a back to the flat in order to pull the LB from the middle of the field. What a system!

When executed correctly, it’s the most indefensible play in the sport.

And I’m not just talking about the magical plays in which Ehlinger spins and twirls out of a tackle before finding someone downfield. No, it’s about deft footwork and subtly gorgeous movements in the pocket that help him avoid pressure and climb into throws. Pocket mobility is the most important weapon in a quarterback’s arsenal: Stick, slide, climb, throw. Ehlinger has it.

But he’s also capable of conjuring up magic acts.

He has the innate ability to keep his eyes fixated downfield as he moves. His movements are purposeful. He looks to buy time for his receivers to uncover downfield before he unfurls a throw, rather than putting the blinkers on, tucking the ball, and rampage towards the first down marker. There aren’t many freshman who show that kind of poise.

Oh yeah, and once he’s out of the pocket, he can sling passes from awkward body positions, too.

The decisive point will be when Ehlinger harnesses that ability. Get itchy feet and the fundamentals of Herman’s system will break down. He must keep the offense on schedule and dip into his box of tricks only when it’s essential. He can’t beat Oklahoma on his own.

It’s going to be a big challenge. But isn’t everything bigger in Texas?

If Ehlinger plays fast, and dances his way to a couple of magical moments, he might just hand Herman the program-defining win he’s looking for.