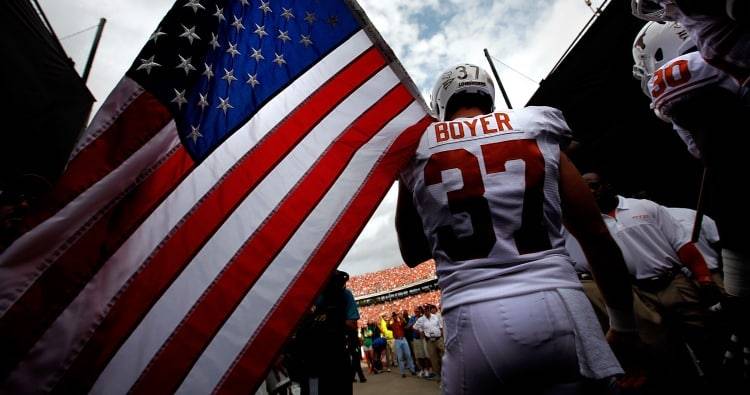 Former U.S. Army Green Beret and Texas football walk-on Nate Boyer is hurting more than he was a year ago when he first penned an open letter to former 49ers quarterback Colin Kaepernick.

He’s now writing to the entire country in an open letter told to ESPN.

“I was hurt when I saw [Kaepernick] sitting on the bench during the national anthem, but I’m much more hurt now,” Boyer said in the ESPN article. “Not by him, not by where we’re at now with the protests, but by us.”

Boyer voiced his concern for the current divide in the United States between a nation of people that are inherently competitive. America’s “winning” mentality transcends sports, according to Boyer.

The NFL players’ protests and the opposing side shouldn’t be about who’s right or wrong, however, says the Army veteran.

Boyers says unity is needed more than ever. And the people who should bring Americans back to each other are the ones at the head of each side of the police brutality protests — Kaepernick and President Donald Trump.

“Colin Kaepernick and President Trump should be the ones uniting our country together,” Boyer said. “Wait…what? I know it sounds crazy, but maybe that’s exactly what we need to see. Maybe that’s how we start to heal. Two men sit in a room and talk, simple as that.”

Boyer hopes Americans will love each other again, and ended the letter asking people to stop taking sides and come together to fix America’s issues.

“So please, no more lines in the sand, not at home, not among our people,” Boyer said in closing to ESPN. “No more choosing sides, no more ‘for or against.’ I believe our Veterans will be called upon to lead the way in healing the world and solving its problems; right now our country needs that more than I can remember.

“So I’ll be here, standing in the radical middle, doing what I can to continue fighting for those that can’t fight for themselves. Let’s get this thing fixed together, you and me. I love you all with all my heart.”

Texas vs. Oklahoma: A Q&A with a Sooners beat writer