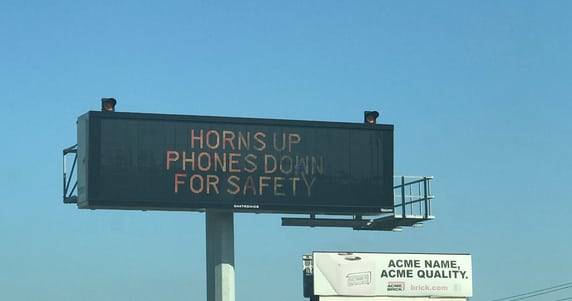 Texas is set to face No. 12 Oklahoma in the always-anticipated Red River Showdown on Saturday. Longhorns fans traveling on one highway in North Texas on Friday were in for a welcoming sight.

A traffic-monitor in Denton, Texas flashed some support for the Longhorns, reading “Horns up, phones down for safety.”

The original message was followed by a second message reading “be safe, drive smart, beat OU.”

The placing of the safety message was a little ironic, considering Oklahoma fans traveling from Norman to Dallas will likely pass through Denton on the way down to the game.

It’s not the first instance of a traffic monitor having some football fun ahead of the Red River Showdown. A monitor in Oklahoma had a similar message displayed earlier in the week — though Texas fans will like the one in Denton much more.

The rivalry between the Longhorns and Sooners is historically regarded as one of the greatest in college football. Both teams have already encountered a loss this season, but the spirit of the rivalry hasn’t died down one bit — per usual.

Oklahoma and Texas will kickoff from the Cotton Bowl in Dallas, Texas at 2:30 p.m. CT on Oct. 14. The game will be televised on ESPN.

The post LOOK: Highway monitor in North Texas cheers on Longhorns ahead of Texas-Oklahoma game appeared first on Hook ‘Em.

Texas’ notable number: Big plays against the Longhorns — and the number seven

The Eyes of Texas: 3 Sooners the Horns will be watching