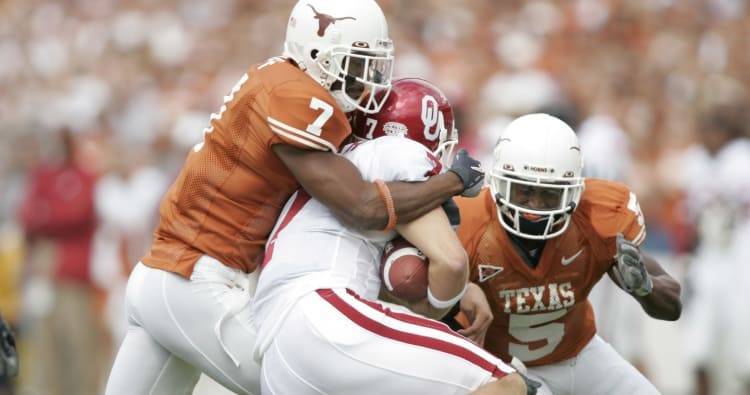 It seems like a lifetime has come and gone since Michael Huff donned the burnt orange on Saturdays in Austin.

The last such sighting came on Jan. 4, 2006 as part of the Texas Longhorns Rose Bowl National Championship victory over USC, and much has changed in the 11-plus seasons since.

A Texas team led by Colt McCoy later reappeared in the National Championship against Alabama, although the 37-21 loss sparked a snowball effect for what became a staggering 42 losses between 2010-16.

Now under the guidance of first-year coach Tom Herman, the Horns 2017 season is off to a 3-2 start and sits tied atop the Big 12 at 2-0. As a result of Texas playing the best football it has since 2013, the world is a better place; at least according to Huff, who went it depth on what being a Longhorn means to him for The Player’s Tribune.

“When Texas is playing good football, it just seems like the world is a better place,” Huff said.

“It’s hard to describe exactly. It’s almost like there’s this warm feeling all throughout campus, Austin, central Texas and the entire state. There’s a definite buzz of positivity. The grass is greener, everyone is happier and sweet tea just tastes that much sweeter.”

That “warm feeling’ Huff described was a near constant throughout his four-year tenure in Austin.

Between 2002-05, the Longhorns won 45 games, headlined by the aforementioned National Championship to cap Huff’s Jim Thorpe Award-winning season in 2005.

Although the Longhorns former star safety went on to enjoy an eight-year NFL career after helping lift Texas to historical heights, the Horns often porous performances throughout recent years led to a feeling quite the contrary of what Huff gets when ‘Texas plays like Texas.’

“Want to know the worst feeling? The complete opposite feeling of when Texas is playing good football?”

“Wearing an Oklahoma jersey,” Huff said, noting the numerous bets he lost to teammates throughout his professional career that forced him to sport crimson and cream.

While at Texas, Huff and the Horns topped Oklahoma just once in four tries. In the 11 years since, the Red River Showdown has been much more of a back-and-forth affair, with Oklahoma owning the slight 6-5 edge. Now, with a fourth win in the last five tries since the loss to Maryland at stake, Texas has a prime opportunity to even the series since Huff’s departure on Saturday against the No. 12 Sooners.

If that proves to be the case, the grass in Texas will be just a bit greener; the tea will taste just a bit sweet.

The post Michael Huff explains why ‘the world is a better place’ when Texas is good appeared first on Hook ‘Em.

Texas vs. Oklahoma: A Q&A with a Sooners beat writer