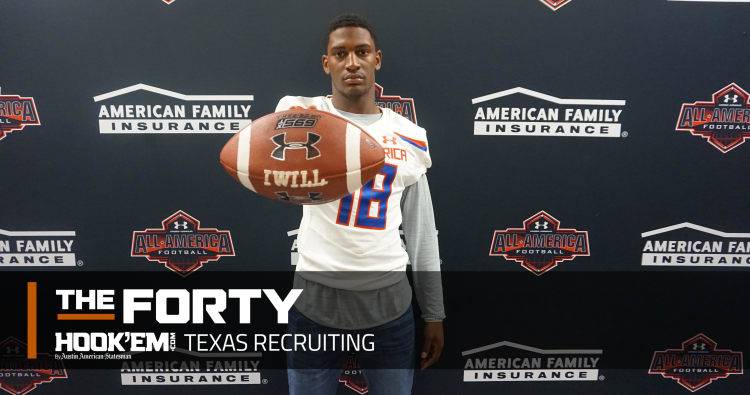 Foster might be the most heralded recruit in Texas’ 2018 class, which is a big statement considering the class ranks second in the nation, trailing only Ohio State.

He’s one of a trio of safeties represented on the Fabulous 55 that are committed to the Longhorns, joining 4-star talents Caden Sterns and DeMarvion Overshown.

Foster, a two-way standout at Angleton, was officially named an All-American on Thursday morning when he was presented with his jersey for the Under Armour All-America Game in Orlando on Jan. 4. The ceremony was held at his high school.

“I’ve been waiting for this moment a long time,” Foster said before the presentation. “It’s been a dream of mine to play in the Under Armour All-America Game since Quandre Diggs played in the game. I’ve been trying to follow his path.”

The senior plays predominately running back at Angleton but is expected to transition full-time to safety once he arrives in Austin. He’s been invited to The Opening Final in Oregon twice due to his potential at the position and is ranked as the No. 1 safety prospect in the country, per the 247Sports composite.

“Going to The Opening twice ranks up there as far as high school experiences, but this all-star game will be special,” Foster said. “It’ll be my last time to play as a high school football player, and we’ll have pads on.”

Angleton is 5-0 heading into a bye week. Foster, playing predominately at running back, has 418 yards and seven touchdowns. He’s also proven to be a big-play receiving threat out of the backfield, hauling in seven catches for 286 yards and three touchdowns.

Foster said he’s nursing an ankle injury and hopes to be back on the field on Oct. 20 for Angleton’s next game. He missed most of his junior season with a knee injury.

Three 4-star wide receivers are currently committed to the Longhorns. Texas isn’t done at the position and Bush is one of the remaining possibilities along with 5-star Terrace Marshall and in-state 4-star Jaylen Waddle, among others.

Bush received a Texas offer on June 17, one of his 41 offers. It was a meteoric rise on the recruiting scene for a player who didn’t start playing football until ninth grade. The 6-5, 191-pound prospect participated at The Opening over the summer and was awarded his jersey on Wednesday afternoon at Schertz Clemens High School for the Under Armour All-America Game in Orlando on Jan. 4.

“It is amazing because a year ago I wasn’t even sure I’d get one offer to play at the college level. Now one of the most famous brands in the world is inviting me to play in an all-star game. It’s a humbling experience,” Bush said. “It is a dream for me.”

Bush started playing football in the ninth grade. He reached the varsity level as a sophomore and became a full-time starter as a junior. He’s a late-bloomer on the football field. Bush always had the height and the raw speed, but he didn’t always have the coordination or experience.

“It is fun to see where he is now compared to the first time I saw him as a ninth grader,” said Schertz Clemens head coach Jared Johnson. “He stuck out early because of his height but he was still learning how to be an athlete. I saw him make an instinctive catch in his first practice and I knew he’d be something special here.”

Bush isn’t a rah-rah prospect. He doesn’t seek out attention. He’ll do interviews, but mostly because he’s too nice to say no. He attributes his levelheadedness and maturity to his role models.

“My parents keep me humble and talk with me about the process and what is important versus what isn’t important,” he said. “Those two set the foundation for me as a person and I try to carry that over to the field and the classroom.”

Bush will make his college decision at the Under Armour All-America Game, meaning he’ll likely sign during the second signing period of the 2018 cycle, in February.

Any new offers extended to 2018 prospects this late in the cycle are newsworthy. The Longhorns offered Texas A&M linebacker commit DaShaun White from North Richland Hills on Oct. 11.

Blessed to receive an offer from The University of Texas 🤘

White is scheduled to play in the U.S. Army All-American Bowl following his senior season. He’ll be joined at that event by a handful of Texas recruits. White visited the Longhorns for the Stars at Night camp on July 21. He’s set to visit Oklahoma on Oct. 27.

It’s unclear whether this means Texas wants a third linebacker in the class because more scholarships are at its disposal in 2018, or if this might indicate IMG Academy linebacker Ayodele Adeoye is a soft commit. Adeoye did visit Florida last weekend.