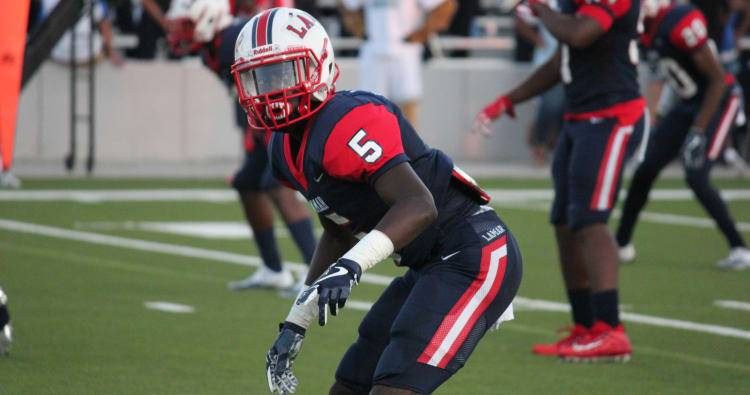 Texas added Houston Lamar cornerback D’Shawn Jamison to its 2018 recruiting class when the 4-star prospect committed to the Longhorns on Saturday.

Jamison, a 4-star prospect, became the second Lamar target to choose the Longhorns; 4-star wide receiver Al’vonte Woodard committed to UT on July 15. Texas hopes to add 5-star cornerback Anthony Cook to the fold on Oct. 28. All three are Lamar players are alums of The Opening Final.

Jamison, a 5-10, 174-pound corner, had 31 offers. He chose Texas over TCU. Another Texas cornerback, Holton Hill, also is from Lamar.

Jamison is a versatile defender who can play outside cornerback, nickel back and free safety. He has lined up at all three positions in high school and is ranked as the No. 17 prospect in the Fabulous 55. He will participate in the Under Armour All-America Game in Orlando on Jan. 4.

Jamison is the second cornerback and the 19th member of Texas’ 2018 recruiting class, which ranks second in the nation. Only Ohio State’s class is ranked higher, per 247Sports’ composite ratings.

“I’ve always felt comfortable with the Texas staff and coach Herman,” Jamison said a few weeks ago. “He loves his players and I can see myself fitting into the culture as a Longhorn. I know those guys want me and value me at Texas and that matters to any recruit.”

In May, Jamison said he, Woodard and Cook have discussed the possibility of all three players signing with the same school.

“It’s a tough process. It takes up a lot of time, but you learn how to balance that,” Jamison said of the recruiting process. “It’s cool to know guys who have gone through this process and be in the same class with teammates going through the same thing. We can kind of talk to each other and get a feel for what we’re thinking. I’m lucky to be here, though. It’s an exciting time in my life.”

A commitment from Cook in two weeks would give Texas a trio of elite cornerbacks in the 2018 class. Jalen Green of Houston Heights, the No. 1-ranked player on the Fabulous 55, is already committed to the Longhorns. And Texas also holds commitments from three of the top safeties in the state.