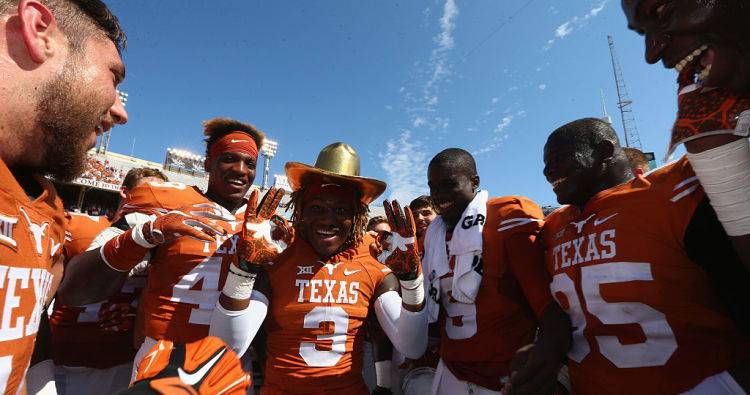 Depending on whom you ask, the Oklahoma Sooners are expected to bounce back today against the Texas Longhorns in the Red River Shootout.

The Sooners enter as nine-point favorites and own a projected win probability of of 79.5 percent, per ESPN’s FPI.

As FOX Sports analyst Joel Klatt pointed out, though, a shaky defense will be Oklahoma’s downfall and thus, result in the Sooners dropping back-to-back regular season games for the first time since 1999.

“Oklahoma; everyone thinks that they’re going to bounce back after that loss, but you can’t bounce back unless play great defense,” Klatt said. “And defense is the one area where they have not been very good the past couple of weeks.”

“I think Texas wins. Texas has got a very good defense,” Klatt added.

If defense does, in fact, prove to be the deciding factor, things certainly appear to be in the Horns favor. Todd Orlando’s unit has looked completely dominant at times since the Maryland loss and as a result, Texas defense headlines the Big 12 in yards per play allowed (5.16), points per drive allowed (1.46).

Meanwhile, Oklahoma’s defense has allowed 39.5 points per game in Big 12 play, with the secondary being torched to the tune of 806 yards and seven touchdowns against Baylor and Iowa State.

Sam Ehlinger, the Longhorns likely starter behind center, passed for 380 yards last week in a double-overtime win over Kansas State.

Anything close to a replicable performance from the freshman and there’s reason to believe the Longhorns return to Austin with a fourth win in five tries and a perfect 3-0 record in Big 12 play.

The Eyes of Texas: 3 Sooners the Horns will be watching