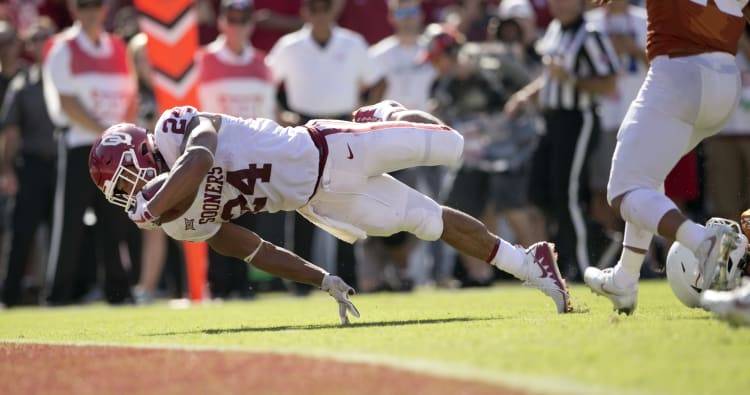 DALLAS — It’s halftime at the Cotton Bowl, and Texas has rallied to turn an Oklahoma blowout into a 10-point game at the break.

The Longhorns scored 10 points in the final 3:15 of the half — a 16-yard touchdown pass to Kyle Porter and a 34-yard field goal by Joshua Rowland on the final play.

Those two scores helped Texas avoid a big deficit. And it helped turn things around after what looked like a mismatch for one-and-a-half quarters.

Oklahoma has 342 yards of total offense. Texas has 139. Baker Mayfield was 8 of 9 in the first quarter and finished the half 11 of 16 for 197 yards and a touchdown. The Longhorns picked him off late, which led to Joshua Rowland’s 34-yard field goal on the final play of the half.

Texas has 26 rushing yards. Sam Ehlinger, making his second straight start and fourth of the season, is 10 of 19 for 113 yards and a touchdown. He’s been sacked twice.

Texas’ first play of the game was a nice one — a 15-yard screen pass to Porter for a first down. But Ehlinger’s first two passes were incomplete and the Longhorns had to punt.

Mayfield also threw incomplete on his first pass, but after a 20-yard run by Trey Sermon, he hit Jeff Badet for a 54-yard touchdown and the early 7-0 lead. Mayfield’s pass hung up in the air but Kris Boyd didn’t recover in time to make a deflection or pick.

In the first quarter, Mayfield was 8 of 9 for 179 yards and a touchdown. Ehlinger was 1 of 5 for 15 yards. The Longhorns attempted five runs — three of them by Ehlinger; Kyle Porter, who got the start, had one run for 5 yards and Chris Warren III had one carry for 2.

Texas’ first points came courtesy of a 41-yard kickoff return from Porter — he broke four tackles and plowed through a fifth — and 15-yard unsportsmanlike conduct penalty for a late hit on the play. Another 15-yard penalty — this one for a horsecollar — set Texas up at OU’s 16. The Longhorns scored on a 16-yard screen pass to Porter.

Big plays so far, on both sides:

2. Derek Kerstetter recovered an Ehlinger fumble inside Texas’ own 20 on the second drive of the game. The Longhorns, trailing 7-0, happily punted rather than having to play defense inside the red zone.

3. John Bonney picked off a Mayfield pass with 59 seconds left in the half, just as the Sooners were getting into scoring territory at the 30.

4. Lil’Jordan Humphrey had two nice catches, a 23-yarder down to OU’s 27 in the final minute of the half and a 17-yarder earlier in the second quarter where he broke two tackles.

1. Mayfield’s 54-yard touchdown pass to Jeff Badet on OU’s first drive was the third longest play from scrimmage against Texas this season. Kris Boyd was defending.

2. On fourth-and-1 at Texas’ 17, Dimitri Flowers took the direct snap and gained 3 yards. Rodney Anderson would convert that into a 15-yard touchdown run.

3. Trey Sermon’s halfback pass to Marquise Brown went for 42 yards and a first down to Texas’ 16 in the second quarter. Some trickery from the Sooners.

4. The defense forced a turnover on downs when Texas went for it on fourth-and-8 from OU’s 43, trailing 17-0 with 9:01 left in the half. Ehlinger threw incomplete.

5. Austin Seibert’s 54-yard punt was downed at the 1. Texas went with a Porter run for no gain, a 4-yard keeper by Ehlinger and an incomplete pass. Michael Dickson punted from the back of the end zone.

The running game continues to struggle. The Longhorns have run it only 14 times — eight of those by Ehlinger. Porter (2-5), Chris Warren III (2-4) and Toneil Carter (2-4) have been ineffective.

The Sooners will get the ball to start the second half.

The post It’s halftime; will there be a Red River Comeback for Texas, trailing 20-10? appeared first on Hook ‘Em.