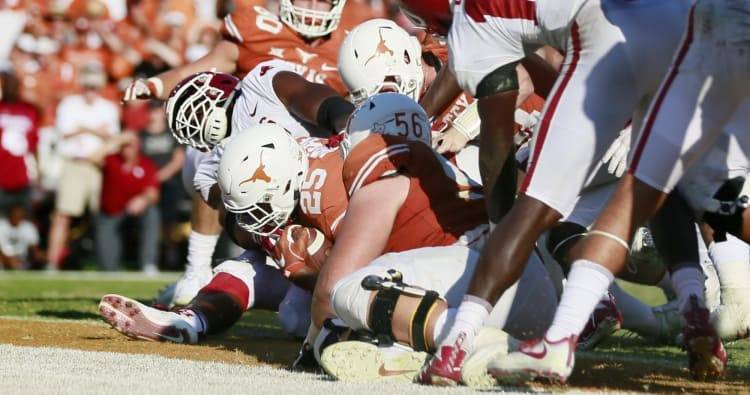 Saturday morning, we looked at four questions that Texas was facing ahead of its matchup with Oklahoma.

1. Did Texas keep OU from the quarterback?

It could have been worse, but the Sooners sacked Sam Ehlinger and Shane Buechele three times, forced Ehlinger into throw-aways to avoid sacks another handful of times and disrupted Texas’ offensive flow. The biggest hurry may have come with 11:26 left and Texas, trailing 23-17, facing fourth-and-8 from OU’s 27. Ehlinger, rushed, threw incomplete. Zach Shackelford returned at center, but Jake McMillon didn’t play and the two tackles again were youngsters Denzel Okafor and Derek Kerstetter.

It would’ve been hard to duplicate what he did last week — 12 catches for 121 yards in the 40-34 double-overtime win over Kansas State. He finished with four catches for 42 yards on Saturday. This season he’s run hot and cold, with the 12-catch game against the Wildcats and a seven-catch game in the opener against Maryland. But he had quiet games against San Jose State (three catches), USC (two) and Iowa State (one).

3. Did any running back stand out?

It was another game of single-digit carries for Chris Warren III (6 carries for 4 yards and a touchdown), Kyle Porter (3-7 with a receiving touchdown) and Toneil Carter (5-6). Ehlinger again was the team’s shining rusher — 22 carries for 106 yards and a touchdown. His numbers helped inflate the Longhorns’ team rushing numbers to a 3.6 yards-per-carry average. Halfway into the season, we’re still waiting for a running back to separate himself from the others.

This rivalry series has featured plenty of big plays in recent years. There were more on Saturday, mostly from the Sooners — the game-winning 59-yard play to Mark Andrews and a 54-yard score to Jeff Badet. CeeDee Lamb had a 44-yard catch and there also was a 42-yard halfback pass trick play. This was nothine new for OU; the Sooners had gained at least 40 yards on 12 plays this season heading into Saturday, and Baker Mayfield had tossed 82-, 52- and 48-yard touchdown passes.