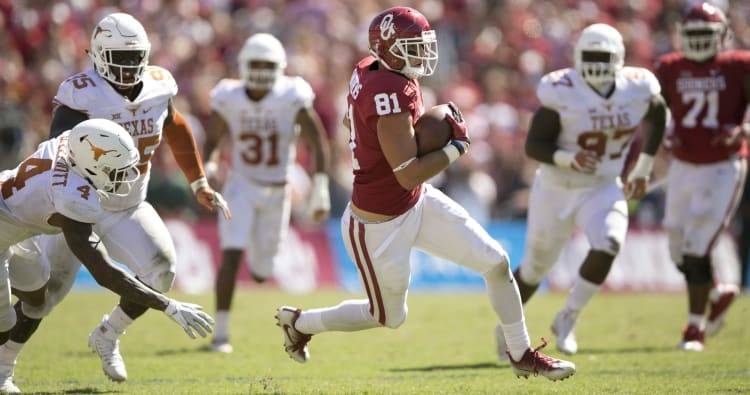 On Saturday against Oklahoma, the eyes of Texas will be upon …

Tom Herman said this week that Mayfield was his own personal front-runner for the Heisman Trophy. Mayfield, who has finished third and fourth in the Heisman voting the last two years, has thrown for 1,635 yards and 15 touchdowns this season. He’s yet to throw an interception, in 134 attempts, and this week he’s ranked No. 1 nationally in completion percentage (74.6) and passing efficiency (214.1). Mayfield, from Lake Travis, is making his fourth career start against Texas.

Oklahoma receiver Dede Westbrook, who burned the Longhorns with a 232-yard receiving day last year, has moved on to the NFL. Two of Oklahoma’s leading receivers this season are a tight end and a fullback. If a shoulder injury keeps freshman receiver CeeDee Lamb and his four touchdowns out of the game, Andrews must step up. An all-conference pick in 2016, Andrews’ 19 catches lead the team.

After playing primarily on special teams as a freshman, Motley has developed into a key contributor on defense. Among Big 12 defenders, only Texas’ DeShon Elliott has more interceptions than Motley, who has two. He also ranks fourth in the conference with six passes defended. (Elliott leads the league with eight; UT junior Kris Boyd has seven). Motley has 23 tackles and also scored on a 77-yard interception return against Tulane.

The post The Eyes of Texas: 3 Sooners the Horns will be watching appeared first on Hook ‘Em.

LOOK: Highway monitor in North Texas cheers on Longhorns ahead of Texas-Oklahoma game