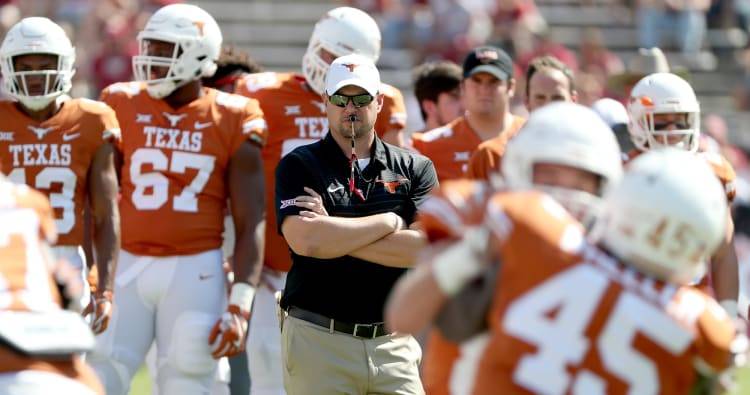 After trailing by 20 points early, Texas stormed back but ultimately came up short against Oklahoma in its first Red River Rivalry game under Tom Herman.

Afterward, Herman faced questions from the media about the heartbreaking loss. Here’s some of what he had to say.

RELATED: Close, but no cigar: No. 12 Oklahoma holds off Texas comeback bid

“Not the outcome we expected nor hoped for. I was extremely proud. The issues are not effort, and that’s a start. To be down 20-0 against one of the best teams in the country and battle back … and take the lead 24-23 in the fourth quarter says a lot about this team and where we’re headed.”

On the Texas offense stepping up after a slow start:

“When one side of the ball is struggling a little bit, the other side picks them up and vice versa. I couldn’t be prouder of how we handled the adversity and came back.”

On the Texas defense struggling early:

“Some of our blitzes were getting out gaps and defensive linemen not slanting to the right place. We knew we had to get it fixed. … We got it fixed and our guys did a lot better.”

On the status of QB Shane Buechele:

(Buechele played briefly late in the fourth quarter when starter Sam Ehlinger had to be evaluated for a head injury.)

“No, he’s not 100 percent. He’s still gimping around a little bit on that ankle. There was not deer in the headlights though, he was ready.”

Ehlinger on leaving the game in the 4th Q. “I was never confused where I was at all. They were just taking precaution.”

On whether Ehlinger will be the starter even once Buechele is fully healthy:

“I would think so at this point.”

On Ehlinger’s performance against Oklahoma:

“He’s a tough dude. He doesn’t get rattled. He’s as competitive as all get-out. He didn’t need to show me anything in this game, I’ve seen everything I need to see from Sam Ehlinger.”

Texas QB Sam Ehlinger: “The atmosphere was incredible. Losing the game is not incredible. I’m looking forward to the next three years.”

On the decision to go for it on fourth down:

(With 11:26 remaining in the fourth quarter, Texas went for it on fourth-and-8 from the Oklahoma 29-yard line.)

“We were against the wind and with our kicking woes recently, down by six at the time, I didn’t feel good about it being into the wind. Had it been the other direction I probably would have jogged the field goal team in.”

The post What Tom Herman said after Texas came up short against Oklahoma 29-24 appeared first on Hook ‘Em.

Third and Longhorns: Inside Oklahoma 29, Texas 24