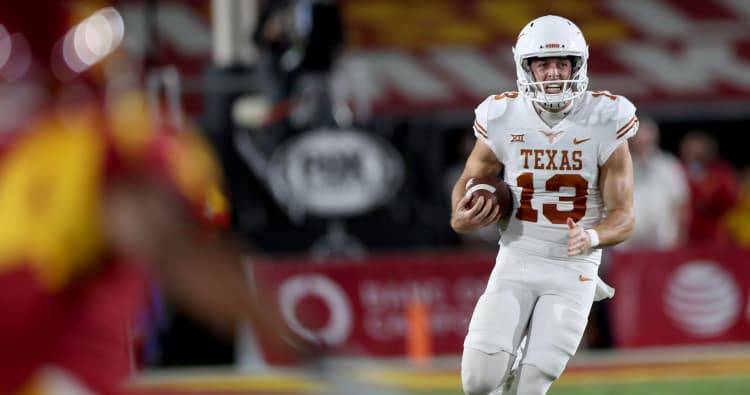 DALLAS – Throughout this season, Michael Dickson has given Texas a leg up on its competition.

A junior punter from Australia, Dickson showed off his leg in Saturday’s 29-24 loss to Oklahoma at the Cotton Bowl. Dickson unleashed a 69-yard punt, and he had a 62-yard kick downed by teammate Josh Thompson at the Oklahoma 2. Dickson punted five times, and his average of 55.0 yards tied the school record he set last year against Notre Dame.

Over the past month, several Longhorns have etched their names into the UT record books. Last week against Kansas State, Sam Ehlinger became the third Longhorn to pass for 300 yards while running for 100 yards in the same game. Reggie Hemphill-Mapps’ 12 receptions against Kansas State and Collin Johnson’s 191 receiving yards against USC were both the fourth-best efforts in Texas history.

“It’s very frustrating, but you can take a lot of positives out of a game like that,” Dickson said. “You’ve got to stay hungry and get onto the next one.”

Dickson is averaging 48.3 yards per punt this season, which trails only Florida’s Johnny Townsend (48.5) among FBS-level punters. Nine of Dickson’s 27 punts have landed inside an opponent’s 20. Only seven of Dickson’s kicks have been returned.

Michael Dickson could start tomorrow for most NFL teams. Rocket leg goes for 62 and #Horns down it at the two.

Following one of his punts on Saturday, American-Statesman columnist Cedric Golden tweeted that “Michael Dickson could start tomorrow for most NFL teams.” Dickson will be draft-eligible this upcoming spring. NFL teams passed on drafting punters this past year, but that snapped a streak that stretched back to the 1999 draft.

On Saturday, Dickson was part of a special teams unit that received mixed review. Sophomore Kyle Porter had a 41-yard kickoff return that set up a touchdown drive, and Joshua Rowland hit a 34-yard field goal. Texas coach Tom Herman, however, opted against having Rowland attempt a 44-yard kick with Texas trailing 23-17 early in the fourth quarter. (UT instead threw an incomplete pass on a 4th-and-8 attempt).

Herman cited the wind at the Cotton Bowl for his decision to leave Rowland on the sidelines. Rowland’s stats – he has missed half of his 10 field-goal attempts – were also a factor.

Dickson holds for Rowland, and he has offered support during the season. Dickson said his first year on campus should be used as encouragement for Rowland, who transferred to Texas from Mississippi Gulf Coast Community College. Dickson’s first punt in a Longhorn uniform went 28 yards, and he also had 17- and 22-yard kicks in 2015. A botched attempt against Oklahoma State was a key play in a 30-27 loss that year.

One year later, Dickson was UT’s first-ever finalist for the Ray Guy award.

“I tell him everything that I wish I would have known my freshman year,” Dickson said. “I think he’s starting to use those techniques and he’s going to be really good.”

On the other sideline on Saturday, Oklahoma’s Austin Seibert averaged 47.0 yards per punt. Hemphill-Mapps returned two of those kicks, but lost 10 yards on one play. Since Hemphill-Mapps’ 91-yard return against Maryland – the third-longest in UT history – Texas is averaging 4.0 yards per return.