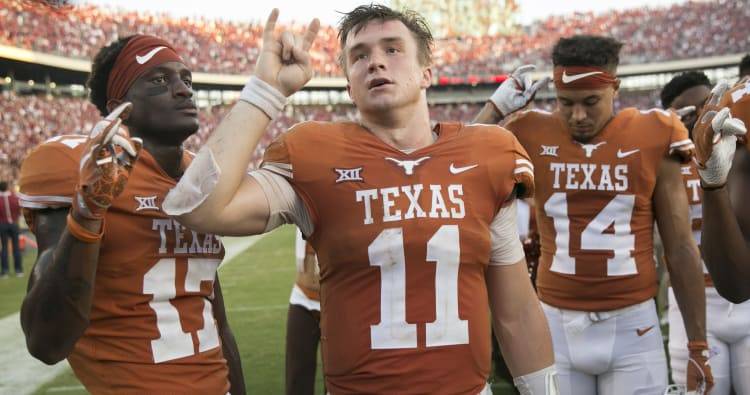 Heart, toughness and moxie headline the numerous traits that have quickly made Sam Ehlinger a respected presence throughout the burnt orange nation in short order.

On Saturday in the Red River Showdown, the freshman made just his fourth career start in an environment that can easily overwhelm, tasked with matching a Baker Mayfield-led Oklahoma offense that can do much of the same. Of course, the Longhorns fell just short in a 29-24 loss, but on the biggest stage of his young career, down 20-0 in the first half, Ehlinger churned out a hero-esque effort and nearly guided Texas to an upset victory over the No. 12 Sooners.

It was the kind of showing that simply demands respect, and Ehlinger received just that from Mayfield, a Heisman candidate and fellow Austin native.

“Tough kid,” Mayfield said of Ehlinger after the Red River Showdown. “You could tell by the way he carried himself. He bounces back after getting hit. Just how we Austin boys do it, I guess. So he’s going to have a heck of a career. It’s obvious. I had to throw that in there.”

A Lake Travis product, Mayfield guided the Sooners to a quick 20-0 and Texas suffering a blowout loss seeming imminent.

Then Ehlinger got going.

Seemingly unfazed by the three-score deficit and magnitude of the Red River Showdown, the former Westlake star helped lead the Longhorns in what ultimately became a 24-3 Texas run into the fourth quarter, capped by Ehlinger’s go-ahead touchdown scamper with just over eight minutes to play.

Sam Ehlinger scrambles for the TD and Texas is winning 24-23 over Oklahoma. pic.twitter.com/7VToPEETpl

By the end of regulation, Ehlinger had completed 19 of 39 passes for 278 yards and put his dual-threat label on full display once again, rushing of 110 yards and 1 score on 22 carries, marking his second praiseworthy performance in as many outings.

Sam Ehlinger has accounted for 871 yds of total offense last 2 games. 2nd most in 2 game stretch in UT history #Staturday

It wasn’t enough to earn the Longhorns a win, but just one day after Westlake snapped a 10-game losing streak to Lake Travis, Ehlinger earned the respect of a bitter rival and one of the greatest talents in college football.

The post Baker Mayfield gives props to Sam Ehlinger: ‘Just how we Austin boys do it’ appeared first on Hook ‘Em.