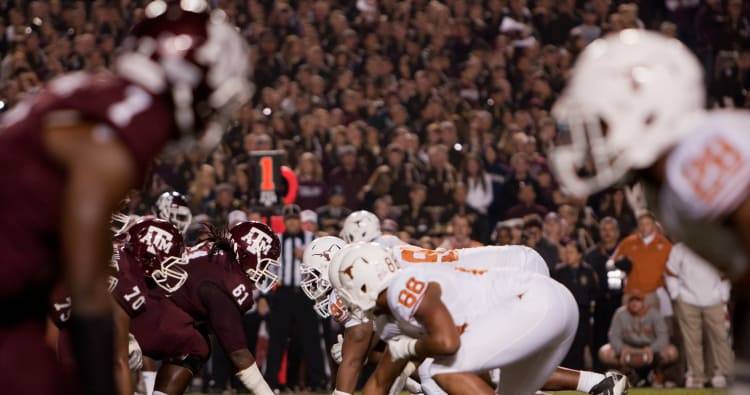 If Texas and Texas A&M are still eager to renew their bitter rivalry, even if just for one night, they may not have to wait until the respective schools officially schedule the matchup for a date years down the road.

Now halfway through the 2017 campaign, bowl projection season is in full swing and ESPN writer David Hale has the Horns and Aggies pitted against each other for this year’s Texas Bowl.

Texas, which owns the all-time series edge over Texas A&M 76-37-5, hasn’t squared off with the Aggies 2011, in which a Justin Tucker field goal as time expired lifted the Longhorns to a 27-25 win.

Texas has missed a bowl game in back-to-back seasons, but the Horns last bowl berth was in the Texas Bowl in what became a 31-7 loss to Arkansas to conclude Charlie Strong’s first season. Texas A&M has made recent appearances in the Texas Bowl, as well, going on to beat Northwestern 33-22 following its final loss to Texas as a member of the Big 12 and more recently, losing to Kansas State last year, 33-28.

This time around, could the Tom Herman era kick off with a Texas Bowl appearance against a Texas A&M team making back-to-back Texas Bowl berths?

If so, it would certainly make for one of the more intriguing matchups of the 2017 bowl season. Sitting at 3-3 on the season, though, the Horns still have their work cut out for them in hopes of ending a two-year bowl drought. At the minimum, Texas will need to win half of its six remaining matchups to make its 54th bowl appearance.

Texas is currently favored in four of its final six games, according to ESPN’s FPI, with projected losses to No. 10 Oklahoma State and No. 4 TCU.