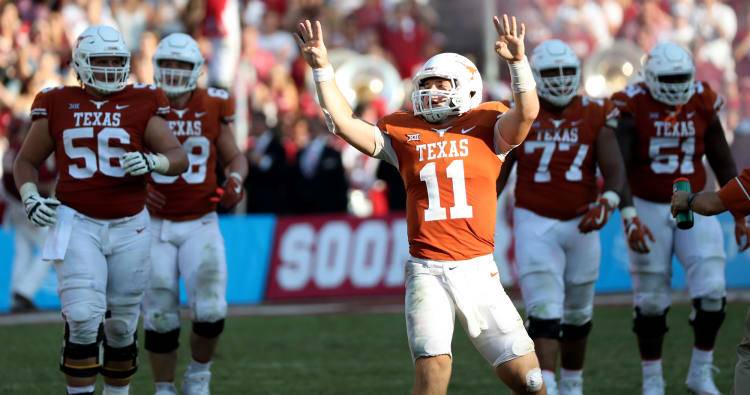 DALLAS — There were 149 snaps taken in Texas’ 29-24 loss to Oklahoma on Saturday. Here are five that ended up making a big difference:

Oklahoma held a 20-0 lead when Austin Seibert nailed a 28-yard field goal with 4:32 left in the second quarter. After recording touchbacks on his first four kickoffs, Seibert then kicked off to the Texas 2.

Kyle Porter ran the kickoff back to the Texas 43. Oklahoma was also flagged for a personal foul on the play, which set up a short touchdown drive. Four plays after his return, Porter scored on a 16-yard reception.

Porter’s 41-yard kickoff return was the longest for UT since Daje Johnson’s 52-yarder in Texas’ 2015 finale. The sophomore running back finished his day with seven rushing yards and 31 receiving yards. He left the game in the second half with a chest injury.

Any momentum gained by Porter’s touchdown seemed to quickly dissipate as Oklahoma quickly drove to the Texas 31. Facing a 4th-and-3, Oklahoma opted against sending Seibert out for a season-long kick. The Sooner offense, however, was unable to convert as Baker Mayfield’s short pass was intercepted by Texas defensive back John Bonney.

The interception was the first of the season for Bonney. The junior started seven times at cornerback last year. He has been used as a role player this season after UT’s new coaching staff tried him out at different positions during the off-season.

Bonney’s play led to a half-ending scoring drive for Texas, which kicked a 34-yard field goal with no time left. The interception was the first of the year for Mayfield, a Heisman Trophy contender who threw 149 pick-less passes to start the season.

After falling into that 20-0 hole, Texas rallied and pulled within 23-17 in the third quarter. After a fourth-quarter drive ended with a fourth-down incompletion at the Oklahoma 27, Texas pieced together a lead-taking possession.

Freshman quarterback Sam Ehlinger guided Texas from the UT 27 to the OU 8 in seven plays, using 22- and 21-yard throws to Reggie Hemphill-Mapps and Cade Brewer to do the bulk of the damage. Ehlinger then improvised and scrambled into the end zone on an eight-yard run.

Sam Ehlinger scrambles for the TD and Texas is winning 24-23 over Oklahoma. pic.twitter.com/7VToPEETpl

Texas’ only lead in the Red River Showdown lasted for three plays. Mayfield found a wide-open Mark Andrews with 6:53 to go, and the tight end streaked 59 yards down the Sooner sidelines for the game-winning points.

Texas takes the lead. OU takes it back.

Red River has NOT disappointed. pic.twitter.com/Ge1NnOgpje

Andrews’ touchdown was the longest play of the day for Oklahoma, which also recorded a 54-yard touchdown and gains of 42- and 44-yards. Texas had allowed seven gains of at least 40 yards over the season’s first five games.

Mayfield did not throw another pass on Saturday, and he exited the day with 302 passing yards. In four career starts against Texas, Mayfield threw for 1,140 yards, six touchdowns and four interceptions. The product of Austin’s Lake Travis High went 2-2 against Texas. (Mayfield started his career at Texas Tech but has been Oklahoma’s starter since 2015).

On UT’s last possession of significance, Ehlinger drove the Longhorns down the field before he was removed with a possible head injury. Texas turned to sophomore Shane Buechele while Ehlinger was evaluated in a medical tent.

Buechele started 12 times last year, and he opened this year in UT’s huddle. Ehlinger, however, saw his stock rise as Buechele missed playing time with shoulder and ankle injuries.

Herman said Buechele was still bothered by an ankle injury sustained in UT’s win at Iowa State on Sept. 28. He still ran twice for 10 yards upon his return, and he completed both of his passes. He was also sacked.

Ehlinger returned to the game following Buechele’s sack, and a drive that reached the Oklahoma 31 ended with his two incomplete passes.

“I would think so at this point,” Herman when asked if he’d stick with Ehlinger once Buechele is fully healed. “But I don’t know. Sam’s got to practice really good and we’ve got to see when that occurs that Shane is 100 percent.”