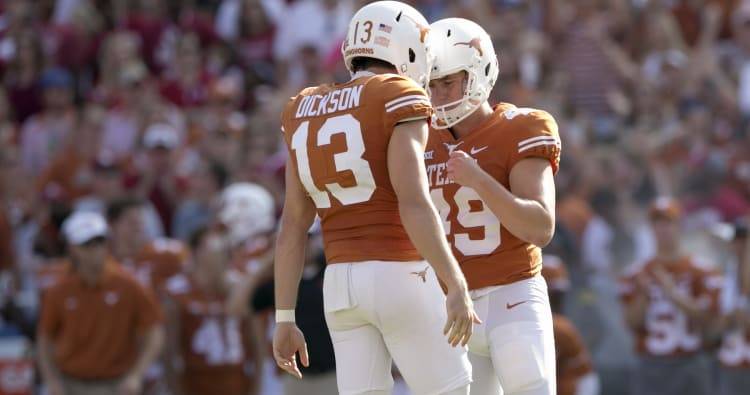 Yet another field-flipping performance has led to Texas Longhorns punter Michael Dickson being named as the Ray Guy Award National Punter of the Week following the Horns Red River Showdown loss to Oklahoma.

In the 29-24 loss, Dickson punted the ball away five times, averaging a school-record-tying 55 yards per punt at the Cotton Bowl. Dickson’s praiseworthy performance was headlined by a season-long punt of 69 yards, followed by a 62-yard punt that placed Oklahoma at its own two-yard-line.

Paired with two more 50-plus-yard punts, Dickson boosted his season averaged to 48.3 yards per punt, up from his 47.4 yards per punt effort in 2016, which served as a new school record and led to Dickson becoming the first Ray Guy Away finalist in school history.

Dickson was also named the Big 12 Special Teams Player of the Year in 2016.

Following his second Ray Guy Award National Punter of the Week honor after doing so against Iowa State, as well, Dickson’s 48.3 yards per punt average headlines the Big 12 and ranks No. 2 nationally, narrowly trailing only Florida Johnny Townsend (48.5).