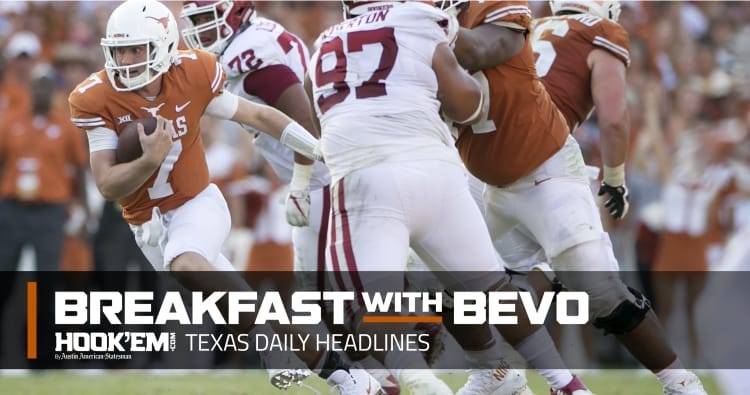 During the fourth quarter of Texas’ 29-24 loss to Oklahoma on Saturday, starting quarterback Sam Ehlinger exited the field for a handful of plays after being slammed to the ground by a Sooners tackler. Insert Shane Buechele into a tight game. After completing two passes for 11 yards, the former sophomore starter scrambled seven yards for a first down. Eventually the drive stalled, but those three plays after Ehlinger went out is the main reason why staff writer Brian Davis argues coach Tom Herman won’t case aside Buechele this year.

‘The Punter’ almost tops in the nation

After Michael Dickson tied his own individual game average – 55 yards per punt – in Saturday’s loss to Oklahoma, the junior from Australia now sits second in overall punting in the nation. He is currently averaging 48.3 yards per kick – only Florida State’s Johnny Townsend (48.5) is outdistancing him.

During the game with Oklahoma on Saturday, the Longhorns picked up another commitment for their 2108 signing class. Cornerback D’Shawn Jamison chose Texas over TCU to become the 19th member committed to the class. In his in-depth Commitment 101 look at him, Hookem.com’s Mike Craven notes that Jamison is an ideal fit for a Big 12 defense because of his ability to play coverage against running backs, tight ends and slot receivers.

Third and Longhorns: Inside Oklahoma 29, Texas 24