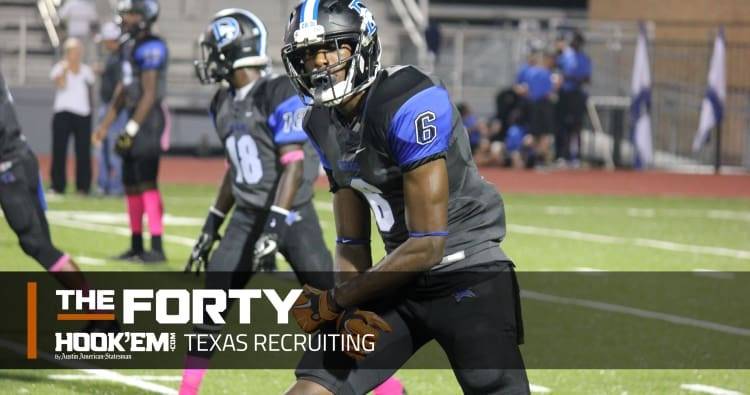 Malcolm Epps understands the road in front of him

Texas needs an influx of tight ends. The Longhorns are relying on true freshman Cade Brewer as their primary target. Epps hopes his role as a true freshman is similar and that he can make an impact when he steps on campus.

“I’m not only looking to go to the NFL, I’m hoping to go to the Hall of Fame,” Epps said after his game last Thursday night. “It’s going to be a process. I need to stop taking plays off because you can’t do that at the next level.”

Epps is a 6-5, 218-pound tight end who plays like a wide receiver and looks like a small forward on a basketball team. He’s long and lanky, excelling more as a receiver than a blocker at this stage in his development. A polished route-runner with consistent hands, Epps’ weakness is clear, even to him.

“I’m working on my blocking and a lot of that will come as I get stronger and older,” he said. “I want to be a three-down tight end who can split out like a wide receiver. I also want to be counted on as a blocker, and that’s where I need to improve the most.”

Epps is ranked No. 14 on the Fabulous 55. A one-time Alabama commit, he’s the No. 192-ranked overall prospect in the country and the seventh-ranked tight end in the 2018 class, per the 247Sports composite. He de-committed from Alabama in February and committed to the Longhorns on Aug. 8. He was in Austin for Texas’ win over Kansas State.

“It’s a great experience every time I’m in Austin. That’s my family down there and we’re trying to do special things,” he said. “The new offense is starting to click and Sam Ehlinger is my guy. He likes to use the tight ends and he’s balling right now.”

Marcus Banks is a future star at cornerback

Epps wasn’t the only reason to watch Spring Dekaney. Marcus Banks, a 2019 cornerback who already holds an offer from the Longhorns, is pushing towards a future spot in the Fabulous 55. Banks is the only in-state cornerback in the 2019 class that currently holds a Texas offer.

The 3-star talent should rise to 4-star status by the time the offseason begins. At 6-foot and 170 pounds, he possesses the size, length and athleticism the Texas coaching staff craves in a defensive back. His versatility allows him to play cornerback, nickel cornerback and free safety.

“Marcus Banks is a dog,” Epps said in glowing fashion. “He’s the best cornerback I’ve faced and I get to face him every day in practice. He wins most of our matchups unless it’s a jump ball and I can use my height. He’s that good.”

Texas was Banks’ third offer following Baylor and Tulsa. The Longhorns extended the offer on June 6. Since then, the Aggies and Houston followed. More are sure to follow, but Epps is already in his ear and helping the Longhorns get a head start.

“I tell him about Texas all the time and it’d be great to play at the same school again,” Epps said. “If I had to put my money on anyone for one play to cover the best wide receiver in the country, I’m choosing Marcus Banks.”

Another defensive tackle option off the table

Texas’ 2018 class is rated No. 2 in the nation and the best in the Big 12. With 19 commitments, room is running out in the cycle and there aren’t many glaring needs left in the class. Defensive line is one of those needs and another name is now off the board after Millwood (Okla.) defensive tackle Israel Antwine committed to Oklahoma State on Sunday.

Antwine was one of eight defensive tackles with a UT offer. Spring Westfield’s Keondre Coburn is the team’s lone commitment at the position. The Longhorns are still chasing in-state options like Bobby Brown and Chasen Hines.

Texas doesn’t have a commitment at defensive end.