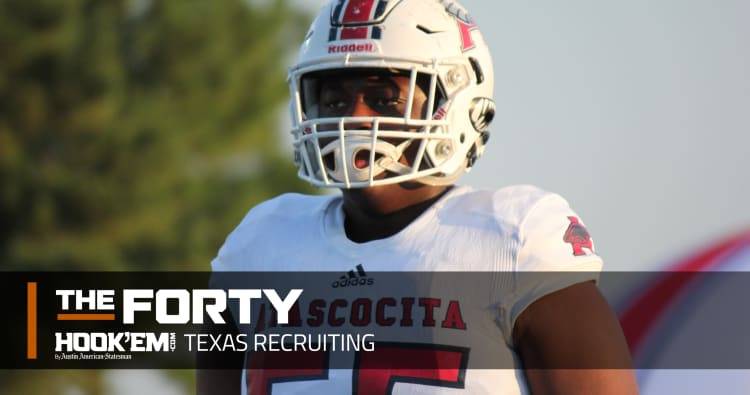 The best offensive lineman in the state is Kenyon Green, a 5-star offensive tackle from Humble Atascocita. The 2019 prospect committed to LSU in December 2016. A commitment that early can mean an unbreakable bound between school and player. Not so for Green.

“I’m committed to LSU, but I’m still wide open and looking at other schools,” Green said after his game last Friday night. “I just want to feel at home and maybe go to the NFL or get a great job in that town or state. I need to know the coaching plan and if the coach that is recruiting me will be there until I’m gone.”

The 6-5, 315-pounder is the No. 3-ranked player on the Next 25 and the No. 10 prospect in the entire 2019 class, per the 247Sports composite, ranking as the second best offensive tackle prospect in the nation next cycle. He’s one of just three 2019 offensive tackles with a Texas offer and will remain the Longhorns’ top offensive line target until Green switches commitments or shuts down his recruitment process.

“It’s a great and humbling feeling to have this type of attention and know I can go to a great college that my parents won’t have to pay for,” he said. “It can be a lot to handle at times with all the phone calls and text messages, but I try to have fun with it. It’s a unique experience.”

Texas is firmly in the running for Green. He holds 17 offers and that list is expected to grow as he gets closer to his senior season. He already holds offers from elite programs like Alabama, Oregon, Florida State and Texas A&M.

Green finds it surreal that he’s received this much attention as a tackle. He played defensive tackle until his freshman season in high school and thought his future in football would be as a defensive tackle. A coach switched him to offense in ninth grade and the rest was history.

“Playing offense isn’t too different for me because I still get to bully people on offense like I did on defense,” he said with a laugh. “The cool part of offense is we get to celebrate touchdowns.”

Mustapha Muhammad is the top-rated tight end in the state of Texas, and despite already holding commitments from two tight ends in the 2018 class, the Longhorns have never stopped recruiting the 4-star talent who’s ranked No. 9 on the Fab 55. If Muhammad wants to commit to Texas, the coaching staff will find room.

Muhammad was a first-team all-district player as a junior and holds more than 35 offers. Texas is among his finalists, but most recruiting experts figure either Michigan or Clemson wind up gaining his commitment when he announces at 6:30 p.m. on Friday.

Jalen Green, the No. 1-ranked player on the Fab 55, suffered a shoulder injury in Houston Height’s last game. His coach reports that the Texas cornerback commit underwent successful shoulder. He suffered the injury while playing quarterback for the Bulldogs.

Great news concerning @jaygreen__ . Will be better than before after surgery. If everything goes according to plan….THE POSSIBILITIES

At 3-3, Texas football appears to be definition of average