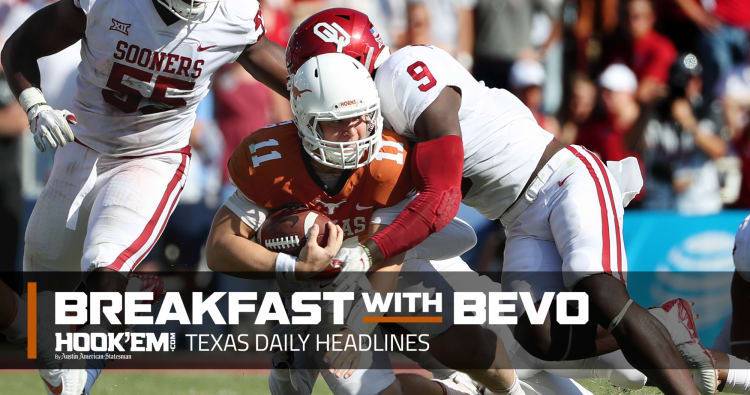 Halfway through the 2017 season, Texas is a toss-up to make a bowl game. The Longhorns came close to upsetting rival Oklahoma in a back-and-fort 29-24 game at the Cotton Bowl, but now must face the reality of what another loss means. At 3-3, Tom Herman’s team is average. He admitted as much in his Monday press conference, while also offering up a rough plan of how to get better.

The Longhorns’ 3-3 record also begs the question: Is this team going to make a bowl game? Columnist Kirk Bohls went there, analyzing what Texas has remaining on its schedule and what the adjusted expectations should be for a team that had high hopes coming into the season. As Bohls states, “the Cactus Bowl is starting to sound pretty good.”

The Texas Tip-Off on Wednesday marks the unofficial beginning of basketball season, but the backdrop to college hoops is one of controversy. Shaka Smart offered up his take on the ongoing FBI investigation into college basketball recruiting. The Texas coach also addressed his stance on players protesting during the national anthem.

Through six games, wide receiver Collin Johnson and left guard Patrick Vahe were the only Texas offensive players to start every game. That is likely to change on Saturday, with Johnson listed as the backup “X” receiver when UT released its depth chart Monday. Johnson leads the Longhorns with 511 receiving yards.

The post At 3-3, Texas football appears to be definition of average appeared first on Hook ‘Em.

Mike Gundy calls Texas ‘the most athletic team’ in Big 12