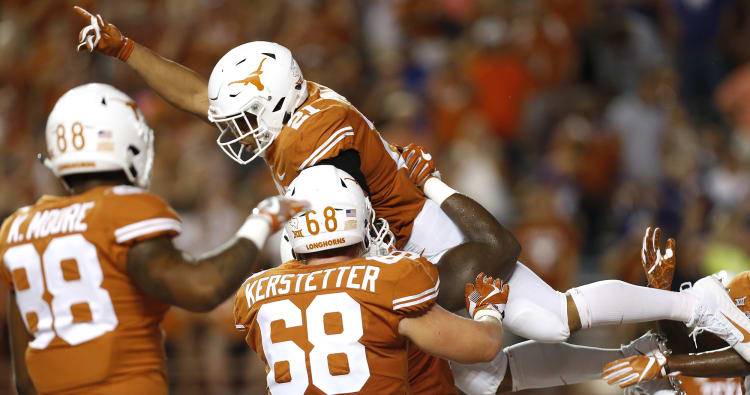 One year ago, Derek Kerstetter may have viewed Saturday’s Texas-Oklahoma State game as a homecoming. Instead, things will be business as usual for the former Cowboys commitment who has become a freshman starter for the Longhorns.

Kerstetter, who’s expected to make his fourth straight start at right tackle, once was a member of Oklahoma State’s 2017 recruiting class. But the freshman from San Antonio has become an unlikely starter on Texas’ offensive line.

“You don’t see many true freshmen playing, especially at tackle, at this level, and he’s doing an admirable job of it,” Texas coach Tom Herman said.

Kerstetter has considered himself a Longhorn since the day after last Christmas, the day the San Antonio Reagan standout flipped his orange-cloaked commitment from Oklahoma State to Texas. He had developed a relationship with new Longhorns offensive line coach Derek Warehime while the coach was on Herman’s staff at Houston; Kerstetter took the coaches up on their offer when they moved over to Texas.

“It’s the University of Texas,” Kerstetter told the American-Statesman this spring. “They have some of the best pride and tradition in the nation. I’ll love to get to play there. It’s been a dream.”
Kerstetter was a three-star recruit who played tackle in high school. But he was recruited to Texas as an interior lineman. He worked at right guard and center at the U.S. Army All-American Bowl in January.

Warehime told reporters in August that Kerstetter had been getting reps at the tackle positions since UT coaches were stressing versatility with their linemen. The newcomer remained a candidate to redshirt and work mostly on the scout team this fall. Then Connor Williams got hurt.

Williams, UT’s All-American left tackle, suffered a knee injury in the second quarter of a double-overtime loss to USC on Sept. 16. The Longhorns reshuffled their offensive line but ended up yielding five sacks to the Trojans. In Texas’ next game, at Iowa State 12 days later, Kerstetter made his college debut — as a starter. (Tristan Nickelson and Denzel Okafor have started at left tackle since Williams’ injury).

Kerstetter was penalized for a false start and holding in his first game, but hasn’t drawn a flag since. Last week against Oklahoma he pounced on a fumble. Texas has allowed five sacks over its past three games, and quarterback Sam Ehlinger wasn’t sacked once against Kansas State on Oct. 7, when he attempted 50 passes.

“This is a guy that’s going to scratch and claw and scrape for everything and give you everything he’s got to make sure his guy doesn’t make the tackle,” said Herman, who proclaimed that Kerstetter’s “toughness is off the charts for a true freshman.”

Herman said the 6-6 Kerstetter weighs only 280 pounds, so “he’s still got years worth of development from a strength and size standpoint to work on.” The Longhorns’ line also needs to get better in run blocking. Texas ranks 62nd nationally in rushing offense, but hasn’t gotten much backfield production lately outside of Ehlinger, who has 42 of the team’s 79 carries and 213 of the team’s 305 rushing yards over the past two games.

Still, junior running back Chris Warren III had a favorable comparison for Kerstetter this week.

Herman noted this week that Houston center Will Noble, who hails from Leander Rouse, had been the only true freshman to start on one of his offensive lines before Kerstetter. But Kerstetter’s not the only member of Texas’ 2017 signing class that has made an impact on offense. Ehlinger has started four games, running back Toneil Carter was on the field to start the Iowa State game and tight end Cade Brewer made his first start against Oklahoma.

The post Derek Kerstetter, a one-time OSU commit, continues to develop as a freshman starter appeared first on Hook ‘Em.

Bohls: Rhinos, receivers and kicking for three – loves and hates of the Texas season so far