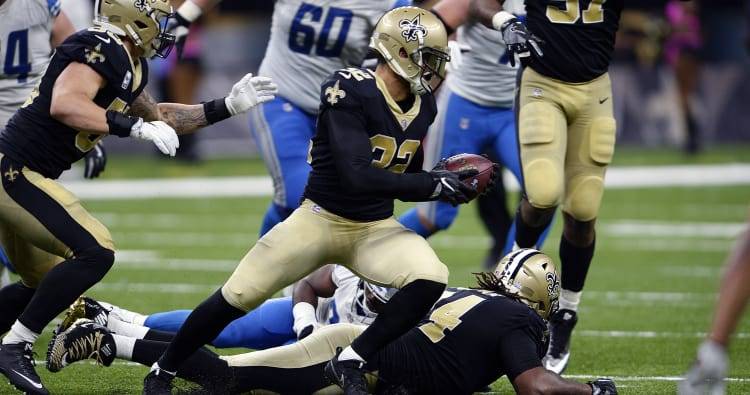 The bye week must have worked wonders for the Saints defense. They forced five turnovers and scored three touchdowns in the 52-38 win over the Lions. Former Longhorns Kenny Vaccaro and Alex Okafor teamed up to score the game’s first touchdown. Okafor rushed around the left tackle and stripped Matthew Stafford, allowing Vaccaro to jump on the loose ball in the end zone for the touchdown.

.@aokafor57 and @kennyvaccaro4 want you to stand up and get crunk.

Vaccaro had great game, making four tackles, one for loss, and breaking up three passes. He also had an interception he returned for 11 yards. Okafor finished with two tackles, a sack and a pass deflection.

Another former Longhorn who got in the end zone this weekend was Malcolm Brown. The backup running back did it in a non-traditional way for the Rams.

Rams block the punt and score!
Don’t see that everyday

Brown snatched the ball out of the air after it was blocked and rumbled into the end zone from eight yards out. He rushed the ball three times for 17 yards in his more usual role.

Malcom Brown, the defensive tackle for New England, had a solid game as he recorded a sack, four tackles and two tackles for loss in the 24-17 win over the Jets. It was Brown’s first sack of the year. He’s recorded three sacks in each of this first two complete seasons.

D’Onta Foreman, RB, Texans—He touched the ball way more than in the previous week in the 33-17 win over the Browns. He led the Texans with 59 yards rushing on 12 carries.

Lamarr Houston, LB, Texans—Houston didn’t have a team last weekend, but when the Texans lost J.J. Watt and Whitney Mercilus the former Longhorn got the call. He had a great debut with the Texans as he recorded a sack and forced a fumble.

Brian Robison, DE, Vikings—Robison had three tackles and a sack in the Vikings 23-10 win over the Packers.

Derrick Johnson, LB, Chiefs—Johnson and the Chiefs suffered their first loss of the season, falling 19-13 to the Steelers. Johnson was second on the team with six tackles.

Keenan Robinson, LB, Giants—Robinson had six tackles in the 23-10 upset win over the Broncos on the road. He added two pass deflections.

Jordan Hicks, LB, Eagles—Hicks had four tackles as the Eagles topped the Panthers 28-23 on Thursday night. Unfortunately, Hicks aggravated an ankle injury in the game.

Justin Tucker, K, Ravens—Tucker was perfect on the day, going 3-for-3 on field goals in the 27-24 overtime loss to the Bears. Tucker’s 50-yard field goal with 2:56 left to play pulled the Ravens to within eight points.

Phil Dawson, K, Cardinals—Dawson was 1-for-1 on field goal attempts and connected on five extra points in the 26-24 loss to the Redskins.

Adrian Phillips, CB, Chargers—Phillips had two tackles in the Chargers’ 17-16 win over the Raiders. He suffered a neck injury, but was able to walk off the field.

Quandre Diggs, CB, Lions—Diggs made two tackles in a wild loss to the Saints.

Marcus Johnson, WR, Eagles—Johnson made his second catch of the season, a 16-yard comletion, in the Eagles’ win on Thursday.

Brian Orakpo, LB, Titans—Orakpo had one tackle in the win over the Colts on Monday night.

Fozzy Whittaker, RB, Panthers—Whittaker had just one carry for minus-3 yards.

Earl Thomas, S, Seahawks—Thomas and the Seahawks were on by in Week 6.

Trey Hopkins, OG, Bengals—Hopkins and the Bengals were on by in Week 6.

Geoff Swaim, TE, Cowboys—Swaim and the Cowboys were on by in Week 6.

Hassan Ridgeway, DT, Colts—The defensive tackle failed to record a stat in the Colts loss to the Titans Monday night.

Colt McCoy, QB, Redskins—McCoy wasn’t called into action in the Redskins’ 26-24 win over the 49ers.