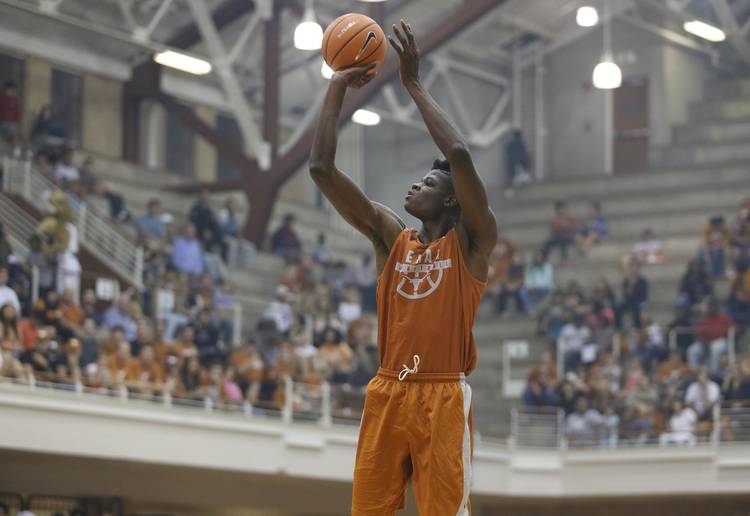 This Texas basketball season is already off to an impressive start. Freshman Mo Bamba entered the post-game news conference and shook hands with every person in the room. Talk about first impressions.

Two hours beforehand, Bamba and the Longhorns made quite a strong impression as a collective unit inside Gregory Gym.

Granted, it was an intrasquad scrimmage in front of a few thousand fans on a Wednesday night in October. We’re months away from those cold, season-altering February days in Ames, Iowa, or Lawrence, Kan. Still, it’s quite clear these are not the same Longhorns that went 11-22.

“Obviously, a lot of stuff to get better at,” coach Shaka Smart said. “But I think you saw glimpses of the potential our guys have.”

The veterans looked liked they spent the entire offseason in the “lab,” as Eric Davis Jr. called it. Andrew Jones scored 15 points, Davis had 13 and Kerwin Roach scored 10 more. Of course, that wasn’t as impressive as Roach leaping and dunking over his mother in the pre-scrimmage dunk contest as part of the Texas Tip-Off event.

“Let’s feel good right now, but tomorrow let’s get right back at it,” Davis said. “This is valuable tape, like coach always says. Each individual player I’m sure is going to get around to watching their own minutes and there’s room for growth.”

The newcomers turned heads, too. Bamba had 17 points, 11 rebounds and three blocks. Despite being hampered with a wrist injury, Dylan Osetkowski had eight points, five boards and hustled all over the place.

And there was freshman Jericho Sims, the Minnesota native who had 11 points and was active all night.

“Jericho’s a freak of nature,” Jones said. “Y’all are going to know about Jericho Sims here pretty soon. An under-the-radar guy is not going to be there too much longer.”

If the Longhorns can get this ultra-quiet teammate to speak up a little, Texas might have a dynamic playmaker. “Trust me, by the time we play our first game, he’ll be chirping a little bit,” Bamba said.

Again, it was an intrasquad scrimmage — a glorified practice, if you will. Still, the Horns were a combined 12 for 29 from 3-point range and shot 48 percent overall. Eight different players connected from downtown. That alone was a sign of improvement. If anyone’s keeping an office pool, the Orange team beat the White squad 58-49.

Texas shot 29.2 from 3-point range last season, which challenged the school record low of 27.6 set during the 1998-99 campaign. Still, that figure was last in the Big 12 and one the primary reasons the Longhorns were last in scoring overall (67.1).

Theoretically, the offense should flow better this season now that there’s more depth and athleticism. Freshman Matt Coleman, the projected starting point guard, didn’t do anything necessarily show-stopping. He had nine points, two assists and three turnovers. But Coleman helped the Orange team pile up 16 fast-break points and 14 points off turnovers in the 24-minute affair.

Coleman, Jones, Davis and Roach can work the perimeter while Bamba and Osetkowski have their way in the middle. That may be one of this team’s real strengths, the power in the paint.

Asked if this team needs an edge, Bamba said, “Absolutely. That’s exactly what we needed. I used to watch almost every game from last year. Amongst a bunch of things, one thing that we really needed was a guy to get out there and give a little nasty. Whether it’s me or Matt or whoever, it’s definitely necessary at some point.”

Lest anyone get ahead of himself, Smart pulled back the reins just a tad. “Mo’s got a long way to go to be nasty,” the coach said. “I think if we are that, it’s got to be a collective thing. Mo has to do his part. Dylan has to do his part.

“I think Andrew and Snoop (Roach) can really set a tone for us defensively, because they’re so big and athletic for guards,” Smart added. “But it has to be a mentality and an approach.”

There’s clearly a different mentality about this bunch. Part of that is due to the roster turnover itself. There are six new players that weren’t around last year. One of those is Bamba, a possible program-changer.

“They were missing probably some sort of veteran leadership, and you could see it toward the end,” Bamba said. “But this year, you can see it big time. We’ve got guys like Dylan, Eric and Kerwin Roach. Those guys will be the difference makers. You’ll see it down the stretch; you’ll see the veteran experience.”

Fans will likely see a different Texas squad this season, if Wednesday was any indication. Heck, Bamba already feels transformed just being here. His teacher at Westtown School in West Chester, Penn., said he had to come to Texas and get a cowboy hat.