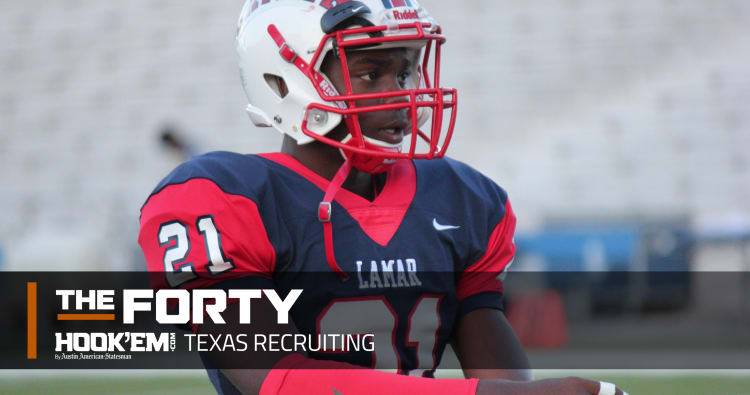 Texas picked up commitment No. 19 on Saturday when 4-star cornerback D’Shawn Jamison of Houston Lamar chose the Longhorns over TCU and a host of other P5 offers. Tom Herman and his staff hope to sign at least 23 players, and that could grow toward the 25-man limit with expected attrition after the season.

That leaves roughly 4-6 slots left in the 2018 cycle barring de-commitments. Here are five options to finish up the class:

Odds of signing with Texas: 55 percent

The Longhorns moved into good position with Cook after they rolled out the red carpet for his visit earlier this month — plus showing improvement defensively since the season opening loss to Maryland when Cook was there to watch. Ohio State continues to make a push and it would not be a surprise if the 5-star cornerback chooses the Buckeyes.

Ohio State’s class is ranked No. 1 in the country per 247Sports’ composite ratings. Texas is No. 2.

It’s basically a coin flip between Texas and Ohio State.

Odds of signing with Texas: 60 percent

Ossai is another recruit that most Texas fans didn’t think the Longhorns had a shot at as the season began; Ossai said early and often that Texas A&M was his dream school, so most figured he’d already be a part of Kevin Sumlin’s 2018 Aggies class by now. Instead, Ossai is still working on his decision. Texas made a big impact when Ossai took his official visit to Austin for the Kansas State game. Texas A&M gets the final official visit, but the Longhorns may have done enough to move them into the driver’s seat with him.

Odds of signing with Texas: 65 percent

The Longhorns’ biggest need remaining for 2018 is the defensive line, specifically defensive end. Texas’ lone defensive line commit in the cycle is defensive tackle Keondre Coburn. The Longhorns want to sign two ends. Pulling off Ossai and Perkins would be satisfactory for Texas in a down year in the state for defensive ends. Oklahoma is Texas’ main competition for Perkins.

Odds of signing with Texas: 40 percent

Waddle is the best slot receiver in the state and the Longhorns want to add another slot receiver, especially if current out-of-state commit Rondale Moore de-commits and stays at a program closer to home, like Purdue. Waddle is good enough to take even if Moore remains pledged to the Longhorns, though it would be a stretch to call Texas a leader at this point.

Texas is in good position with Bush if numbers allow the Longhorns to sign an additional outside receiver. Bush was recently awarded his jersey for this season’s Under Armour All-America Game and mentioned the Longhorns when naming his favorite schools. Texas already holds commitments from Brennan Eagles and Woodard and are set to host 5-star outside receiver Terrace Marshall in November.

The post Next five up? Five guys Texas wants to finish the 2018 recruiting class appeared first on Hook ‘Em.