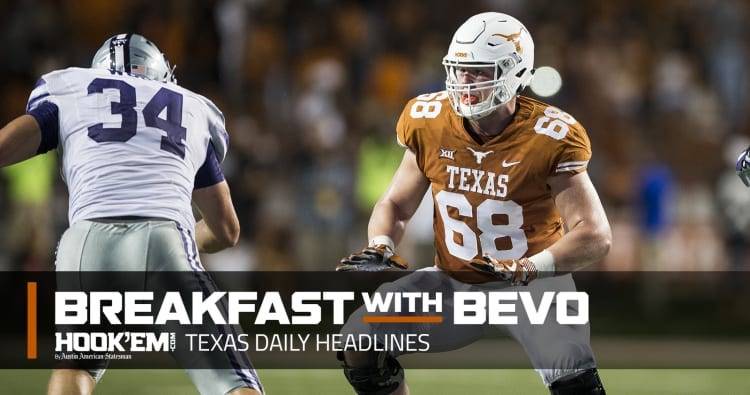 Texas right tackle Derek Kerstetter has filled in nicely despite his status as a freshman. He’s heading into his fourth straight start at the position despite being an unlikely starter to begin the year. Kerstetter was a member of Oklahoma State’s 2017 recruiting class before switching to Texas. Recruited to play as an interior lineman, he finds himself playing his high school position in order to help the Longhorns deal with injuries. Coach Tom Herman has voiced praise for the freshman, saying he’s done an admirable job and has toughness that measures off the charts, writes Danny Davis.

The Texas basketball team tipped off the season with an intrasquad scrimmage featuring a new-look team. Longhorns fans got a look at a team hoping to improve from last season’s 11-22 season. Shaka Smart, of course, thinks this team has a lot to improve on, but he acknowledged the potential shown on the fan-centered event.

Sound Off: A mid-season review

Texas beat writer Brian Davis and Hookem.com recruiting writer Mike Craven take a look at this current Longhorns team at the midpoint of the season. How do the Longhorns really look so far? They talk about Sam Ehlinger’s play, what the Longhorns could do better and what effect a 3-3 record has on recruiting.

Kirk Bohls on what he loves, hates about this Texas football season

American-Statesman columnist Kirk Bohls loves the guts, the toughness, the potential fulfilled and the never-quit attitude of this Longhorns team. He also has a list of things he hates. Check it out here.

The Whys of Texas: Dispelling assumptions of armchair doctors

In this edition of the Whys of Texas, Texas beat writer Brian Davis addresses the criticism by some regarding Sam Ehlinger re-entering the game against Oklahoma after being slammed to the ground on the sideline. Ehlinger sat out a few plays but returned to the game after undergoing tests in the medical tent. A throwaway on fourth down, apparently, had some thinking Ehlinger wasn’t in his right mind. More comments and emails focused on the Texas running game, the secondary and Herman’s reluctance to kick short field goals.

The Longhorns picked up their 19th commitment Saturday as Houston Lamar’s D’Shawn Jamison chose Texas over TCU. It’s possible the Longhorns end up with a 25-man class, but they are at least hoping to sign 23 players. Recruiting writer Mike Craven breaks down five options for the Longhorns to pursue to fill out the class.

Micaya White had 15 kills while Chiaka Ogbogu and Ebony Nwanebu each added 11 to lead the Longhorns to a sweep over the Texas Tech Red Raiders on Wednesday night in Lubbock. Ogbogu recorded a career high in hitting percentage as Texas improved to 15-2 and 7-0 in the Big 12.

WATCH: Kerwin Roach dunks over his mom during tip-off event