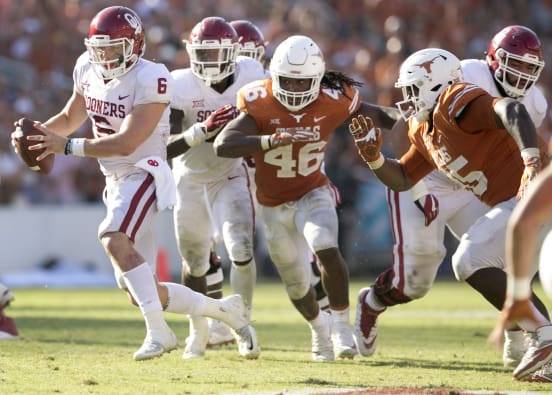 Here’s a look at some Texas players trending up, down and sideways through the first six games of the 2017 season:

Holton Hill, CB: Teams were afraid to throw his way after roaring out of the box with three non-offensive touchdowns. So far: 32 tackles (tied for 3rd on team), 2 interceptions, 3 pass breakups

Malik Jefferson, LB: He’s finally playing up to everyone’s expectations, including his own. This is the player UT fans have waited for. So far: 54 tackles (1st on team), 6 tackles for loss (1st on team), 2.5 sacks, 3 quarterback hurries

Patrick Vahe, G: The offensive line has been full of turnover, but Vahe is the mainstay. He’s bounced back under this new staff. So far: One of only two Longhorns on offense who has started every game

Cade Brewer, TE: The freshman from Lake Travis burst onto the scene against USC. Can he make more big plays this season? So far: 4 catches for 36 yards and 1 TD, in overtime at USC

Collin Johnson, WR: He’s not being targeted enough, but is he doing enough to get open? Got pushed down the depth chart this week. So far: 27 catches (2nd on team) for 511 yards (1st) and 1 TD, averaging 85.1 yards per game

Kris Boyd, CB: Nobody has more confidence than Boyd. But teams are going to keep picking on him until he makes them stop. So far: 23 tackles (7th on team), 0.5 tackles for loss, 1 INT, 6 pass breakups (leads team)

Armanti Foreman, WR: It’s clear this coaching staff doesn’t put up with off-field shenanigans. Either practice hard or you don’t play. So far: 17 catches (3rd on team) for 158 yards and 3 TDs (leads team) — in four games

Jerrod Heard, WR: The wildcat package simply didn’t work. Why was Heard standing near the OU sideline while Ehlinger was on the run? So far: 9 catches for 89 yards and 1 TD, also 13 carries for 54 yards and 2 TDs as a wildcat quarterback

Naashon Hughes, LB: As one of the team’s few fifth-year seniors, Hughes must be more active, especially as a team captain. So far: 29 tackles (6th on team), 3.5 tackles for loss, 2 sacks (3rd), 2 pass breakups

Joshua Rowland, K: Herman may not give Rowland many chances going forward. The junior transfer’s got to nail all of them. So far: 5 of 10 on field goals with a long of 49 yards, with 15 touchbacks in 33 kickoffs

The post Roster watch: Which Longhorns are trending up, down or sideways at the halfway point appeared first on Hook ‘Em.

Eyes on Texas: Midway through the 2017 season, is this cake really baked?