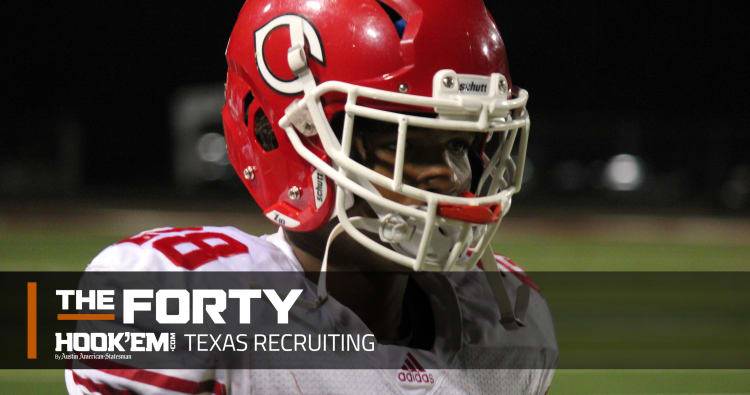 Crunch time around the state

The playoffs are quickly approaching in a season thrown off schedule for many of Texas’ commits after the impact of Hurricane Harvey. Each of the healthy Longhorns commits should be in action this week, though Fort Worth Eastern Hills linebacker Byron Hobbs is still out with a neck injury and Houston Heights cornerback Jalen Green underwent successful shoulder surgery last weekend.

Great news concerning @jaygreen__ . Will be better than before after surgery. If everything goes according to plan….THE POSSIBILITIES

Here is the Week 8 slate of games:

Where: The Star (Frisco)

Newbury Park and 4-star quarterback commit Cameron Rising are 4-3 heading into an away game against Calabasas. Through seven games, the 4-star prospect has 1,187 yards passing and 335 yards rushing, and has accounted for 13 touchdowns.

Through six games, Moore is on a record-setting pace for Trinity for catches in a season. The nationally-ranked Trinity program travels to Ballard for a district game on Friday.

Thompson transferred schools over the summer, following his former offensive coordinator, Jeff Brickman, from Southmoore to Newcastle. His team is 2-5 heading into a game Friday night against Heritage Hall (Okla.). Thompson has thrown for 2,351 yards and rushed for 666, accounting for 25 total touchdowns.

IMG Academy is back in action this week against Salt Lake City East. Adeoye is credited with 11 tackles on the season.

Arizona Western College is 5-0 after a win over Phoenix College. Next up is a home game against Pima on Saturday. Wood-Anderson is second on the team with 22 receptions. He’s yet to score a touchdown this season.

The post The Week 8 guide to watching Texas commits in action appeared first on Hook ‘Em.