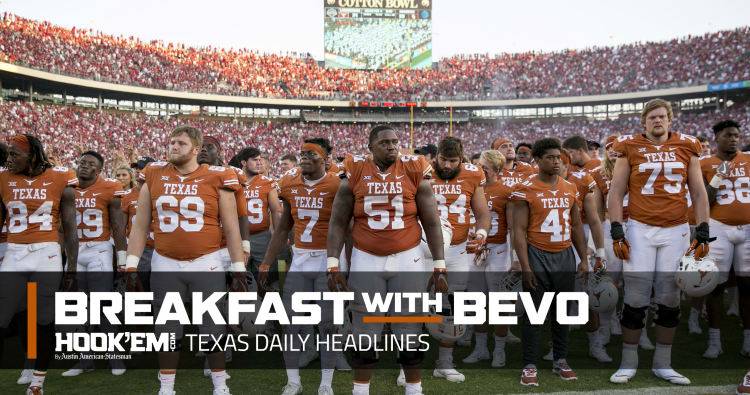 Eyes on Texas: Is this cake really baked?

Revisiting a Charlie Strong quote, Texas beat writer Brian Davis takes a look at the current Longhorns football team midway through the season. He examines what’s working, what’s not and what to look forward to regarding this team. Strong said, “the only thing you need to do now is put the icing on it,” referring to the football team after his season-ending loss to TCU last year. Has that really been the case this year?

Austin American-Statesman columnists Kirk Bohls and Cedric Golden have a jam packed episode of their On Second Thought podcast this week. Oklahoma State head coach Mike Gundy joins the duo to talk about the Saturday game. Also joining the columnists is Greg McElroy, an ESPN college football analyst and radio host. He’ll talk about his national title win with Alabama over Texas for the 2009 national championship and talk College Football Playoff.

Roster watch: Who’s trending up, sideways and down?

Sam Ehlinger has impressed, as has DeShon Elliott. Charles Omenihu and Reggie Hemphill-Mapps are holding their own while Jerrod Heard and Kris Byrd aren’t big highlights for the season so far. Take an extensive look at how this roster is performing here.

Oklahoma State leads the nation in total offense and only one school gains more average yards per play. Texas will have to rotate its defensive players if it wants to keep them fresh. Longhorns defensive coordinator Todd Orlando describes the Cowboys’ offense as “hair on fire.” The Longhorns’ backups will have to play well in spells if Texas wants to slow Oklahoma State.

The Big 12 released the results of its preseason coaches poll on Thursday and the Longhorns were picked to finish fourth in the league. The poll has Kansas poised to win its 14th straight Big 12 championship. The arrival of Mo Bamba has a lot to do with the poll results. Texas fans had a chance to check out the new-look team on Wednesday at Gregory Gym. They got to watch Kerwin Roach throw down a dunk after jumping over his mom.

As a 4-year-old Haley Berg named her youth-league soccer team the “Lady Longhorns.” It was a glimpse into the future. Berg committed to play for Texas when she was still in eighth grade. The two-time Big 12 freshman of the week has helped the Longhorns to a 12-1-2 record.

The post A midseason look at the Longhorns; columnists talk with Mike Gundy appeared first on Hook ‘Em.