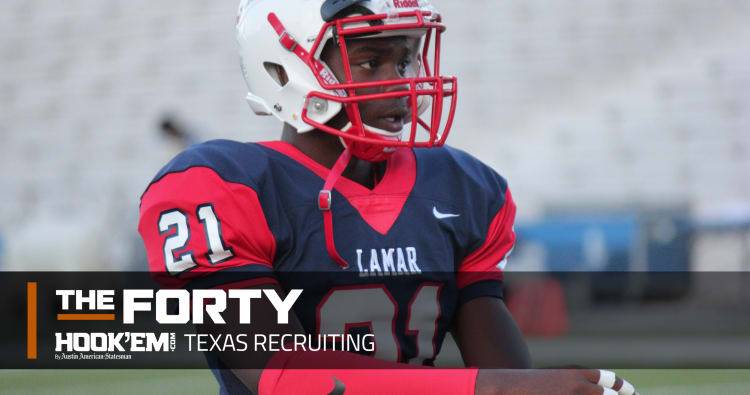 Ten days remain until the best uncommitted player in Texas makes his college decision. The 5-star cornerback was once a sure-bet to commit to Ohio State on his commitment date of Oct. 30, but the Longhorns have built momentum with a red-carpet visit earlier in October and improvement on the field, despite a 3-3 record. LSU made its way back into the picture with a recent visit that highlighted a thin depth chart in 2018, which intrigues Cook.

“Texas wants me to stay in-state and represent Texas, which is important to me. I like the depth chart at LSU, and that program always puts out defensive backs. If I pick Ohio State it will be because I think that school gives me the best chance to develop as a player,” he said. “All of the schools are great and it’ll come down to the best fit for me.”

His teammates are undoubtedly in his ear, even on social media.

“It would matter a lot to me to stay in Texas and play with my teammates here at Houston Lamar. We talk about it a lot and I’ve known the guys in this area that are committed to Texas through camps and different things,” Cook said. “It’s definitely a factor.”

Cook would be the final piece to the secondary class, which already includes 5-star safety BJ Foster and 4-star defensive backs Jalen Green, Caden Sterns, DeMarvion Overshown and Jamison. All five of those commitments are national top 200 players, as is Cook.

“This is the most I’ve been confused throughout the whole process. So many thoughts are going through my head and I just hope I make the right decision,” he said. “I’m going to continue to pray on it and hope to come to a decision by October 30th.”

Cook is set to play in the U.S. Army All-American Bowl on Jan. 6, 2018 in San Antonio after his high school season ends. Cook is the fourth-ranked player on the Fabulous 55 and the 14th ranked player in the country, per 247Sports Composite. He’s the consensus top player in Texas and the second-best cornerback in the cycle.

D’Shawn Jamison settled in as a Longhorn

It was a joyous morning at Houston Lamar High School with D’Shawn Jamison and Al’vonte Woodard received their jerseys for the Under Armour All-America Game in Orlando on Jan. 4. The duo will share a field in the all-star game just like they do at Lamar and like they will at Texas.

“All of this is a blessing and it doesn’t seem real,” Jamison said after the jersey presentation on Friday in Houston Lamar’s gym. “From The Opening to a great high school career to the Under Armour All-America Game. Not everyone gets these blessings and I’m thankful for the opportunities.”

“We’re building something big at Texas and I trust coach (Tom) Herman to make things right at Texas and the 2018 recruiting class is going to help,” he said. “Herman was honest with me since his time as the Houston head coach and he’s helped me learn a lot already.”

The 4-star cornerback committed to Texas directly after the Longhorns fell to Oklahoma in the Red River rivalry game. It was a piece of good news after a tough loss. Jamison committed among friends and family in Houston with the Texas game in the background.

“It was great. I had a good time with my family and friends at the commitment party,” Jamison said. “It was a tough decision because a lot of great programs and coaches wanted me to play football at their school.”

Woodard was the first of the Houston Lamar trio to commit to the Longhorns, pulling the trigger in July. Texas’ 2018 recruiting class is now 19 members deep and still ranked second in the nation and first in the Big 12. Woodard thinks this recruiting class will leave a lasting mark at Texas.

“The 2018 recruiting class is going to help Texas turn it around completely. Those guys are already showing improvement each week under the new staff and that will only continue with more coaching and more talent on campus,” said Woodard on Friday at Houston Lamar. “We’re a close recruiting class and I talk to a lot of the commitments. We’re ready to make our mark at Texas.”

The 4-star wide receiver spent time recruiting Jamison to Texas. Now, the duo will focus its efforts towards fellow teammate Anthony Cook, a 5-star cornerback set to decide between Ohio State and Texas on Oct. 30.

“I’m in Cook’s ear every day. I have a class with him today, and I’ll throw up the Longhorns and get in his ear about Texas,” Woodard said. “We want him at Texas with us.”

Woodard experienced The Opening in Oregon over the summer and now looks forward to experiencing an all-star game in Florida to close out his prep career. The 6-foot-1, 193-pound prospect is a Fabulous 55 member and ranks as the 74th best player in the 2018 class and the 13th ranked wide receiver in the cycle, per 247Sports Composite.

A midseason look at the Longhorns; columnists talk with Mike Gundy

Texas vs. Oklahoma State: A Q&A with a Cowboys beat writer