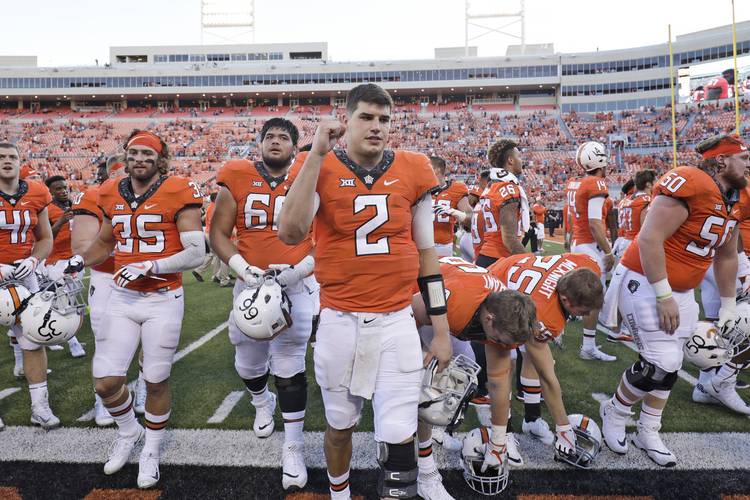 Quarterback Mason Rudolph #2 of the Oklahoma State Cowboys celebrates after singing the school song after the game against the Baylor Bears at Boone Pickens Stadium on October 14, 2017 in Stillwater, Oklahoma. Oklahoma State defeated Baylor 59-16. (Photo by Brett Deering/Getty Images)

For most of the 20th century, Texas dominated Oklahoma State. That spilled over into the next one as well, led by Vince Young and the best pump-fake in UT history.

If you haven’t been paying attention, the 10th-ranked Cowboys have swung this thing entirely in their favor. Oklahoma State is 5-2 this decade over Texas and searching for its fifth straight win at Royal-Memorial Stadium on Saturday.

Sleep in, skip the 11 a.m. kickoff if you wish, Texas fans. But this is a critical battle against a top-10 team that will shape the rest of the season.

The Texas fan base has a tendency to check out after the annual Oklahoma grudge match. Too many Fletcher’s corny dogs. Too much time on the Fair Park ferris wheel. Who knows? But the Longhorns (3-3, 2-1 Big 12) still need laser-like focus. Their whole season may swing on today’s outcome.

If Texas wins, then Tom Herman’s bunch will have taken down the nation’s 10th-ranked team, providing a huge confidence boost. Texas would be 3-1 in league play and still be a legitimate threat to reach the Big 12 title game.

A loss would drop the Horns to 3-4 overall, and Herman’s group would be fighting an uphill battle just to reach a bowl game.

Perception’s everything these days, and now is not the time for the Longhorns to come out flat at home. The Cowboys (5-1, 2-1) have an NFL-caliber quarterback in Mason Rudolph, fantastic speed out wide in James Washington and a solid defense. This team has far more to like than just Gundy’s mullet.

“They have two running backs that I really like,” UT senior Naashon Hughes said. “And Mason Rudolph, of course, runs the show back there.”

“Don’t give up,” Jefferson said. “You could be so close to a goal, turn around and you’ll never find it again. … We know what to do. It’s time to get technique right. It’s time to get the playbook right. it’s time to get guys in the right spot. We lose on big plays, and that’s the problem. We shoot ourselves in the foot.”

Running back Chris Warren III wouldn’t change anything about UT’s first six games. “Nothing,” he said.

“I think if we played those six games all over again, if we played them the way we played (against Oklahoma), I think we would be 6-0,” he said. “We’re just playing harder each and every week.”

Now that Texas has found its quarterback in freshman Sam Ehlinger, and the run defense is getting traction, you can build a case Texas is ready to make a Big 12 run. But considering the lackluster run game and the apparent holes in the secondary, there’s a bearish case to be made, too.

UT officials spent the week fending off slings and arrows about whether or not Ehlinger was hurt in the fourth quarter against OU. Herman was adamant that Ehlinger had been cleared by the medical staff and even practiced on Sunday.

“We are rewarding the guys that are continuing to work hard, make plays, and execute,” offensive coordinator Tim Beck said.

Was this some sort of motivational ploy? Herman is old school in his belief that those who practice well get playing time. That could be a key reason why Armanti Foreman has essentially gotten benched the last two weeks.

Texas is four games above .500 since the start of the 2010 season. This is not a program that can, or should, reward top-tier players for lackluster practice habits. These Longhorns are a long, long way from the 2005 squad, which could simply tee it up and win.

“I think I got more playing time just by going out there every day with energy,” Leonard said. “The coaches really notice when we’re playing our heart out and giving it our all.”

On defense, cornerback Kris Boyd has been under the fans’ microscope for giving up several big plays the last few weeks. Orlando said staffers used a hand-held camera and recorded everything Boyd did on the practice field. “So we knew exactly where Kris’ eyes were, exactly where his knees were,” Orlando said.

Junior Davante Davis and freshman Josh Thompson both had chances to challenge Boyd for his starting job. It doesn’t sound like there will be a change. “To me, Kris is doing the things he needs to do in practice.”

Herman wanted the Horns to scale back some of its playbook this past week. “Let’s at least, you know, don’t be a jack-of-all-trades, master of none,” he said. “Let’s be a master of a couple of things.”

Option plays and the screen game worked wonders against the Sooners. It was the most productive the running backs have been in weeks. Could the Longhorns show more of that against the Cowboys?

But this isn’t a perfect OSU team. It’s a beatable group. But so is Texas.

“Let’s not beat ourselves,” Herman said. “We’ve got to take the next step and play a little bit smarter and hopefully the outcome will be different.”