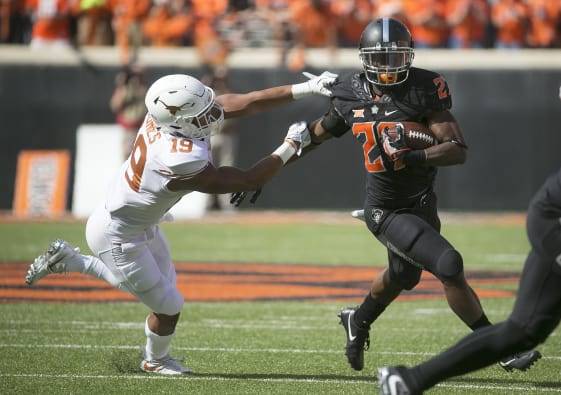 This week’s notable number is 4.

The No. 4 is worn at Texas by junior safety DeShon Elliott, who leads the nation with his five interceptions. Collin Johnson’s 191-yard game against USC and Reggie Hemphill-Mapps’ 12-catch evening against Kansas State rank fourth in UT’s receiving record books. And of the seven Longhorns who have caught a touchdown pass this year, four are not wide receivers.

Oklahoma State is producing more yards of offense per game than anyone in the country (610.7 yards). Only Central Florida is scoring more points than the Cowboys, who are averaging 48.8 points with a season-low performance of 31. Quarterback Mason Rudolph has statistics that compare favorably with most of his contemporaries. James Washington may end up being the top receiver in school history.

“Let’s not forget, their running back was a preseason all-conference pick as well,” Texas coach Tom Herman said this week.

That running back is Hill, who leads the Big 12 with 633 rushing yards. Hill has done his damage on only 106 carries, and he’s rushed for five touchdowns. In addition to a 132-yard effort in the season opener against Tulsa, Hill had 102-, 164- and 117-yard games against TCU, Texas Tech and Baylor.

Texas defensive coordinator Todd Orlando analyzed that the 5-10, 185-pound Hill showcases a perfect blend of physicality and speed. Orlando noted that Hill “runs with his shoulders down.” He also pointed to a 79-yard touchdown run the Cowboy had in last week’s 59-16 win over Baylor.

“I’ve got a ton of respect for him for how hard and physical he runs,” Orlando said. “That’s the combination that you know as a defensive coordinator you ask yourself, is he a physical guy? Great, so he’s not that fast. But if he’s fast, then he’s maybe not that physical. But this kid is both.”

Hill has already hit the 100-yard mark 10 times in his young career. (For context, Thurman Thomas did it 22 times at Oklahoma State and Barry Sanders had 17 such games). His second 100-yard outing was recorded in last year’s 49-31 win over Texas. Against the Longhorns, he ran 25 times for 135 yards and a 30-yard score.

Oklahoma State has dropped 24 of the 31 games in its series with Texas. The Cowboys and Longhorns, though, have split their last 10 games. In six of those, a Cowboy ran for more than 100 yards.

Only 22 FBS-level teams are faring better against the run than Texas, which is allowing 116.7 yards per game. Maryland’s Ty Johnson ran for 132 yards against Texas, and Oklahoma’s Trey Sermon and Rodney Anderson both averaged 4.8 yards per rush last week. UT, however, held San Jose State’s, USC’s and Iowa State’s leading rushers under 50 yards.