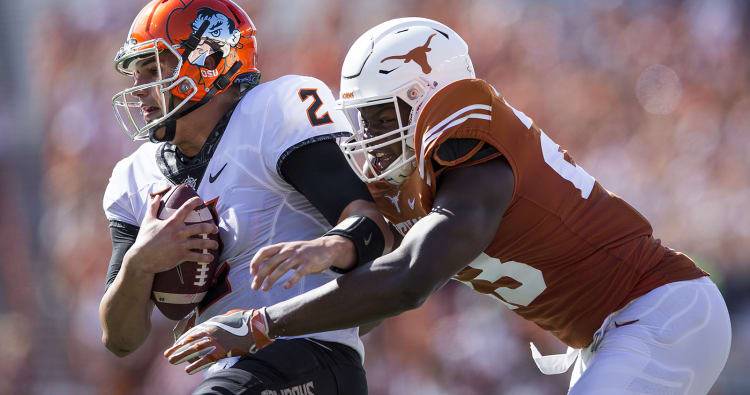 The story of the game? It’s the same as the matchup of the game: Oklahoma State’s quick-strike, No. 1-ranked offense vs. a Texas defense that shut out San Jose State, made the road trip at No. 4 USC a winnable game and frustrated No. 12 Oklahoma last week — when the Sooners’ offense was ranked No. 1 in the country.

How are the Longhorns doing?

But you want to talk about a hurry-up offense? Consider how fast the Longhorns mobilized to snap it after their biggest play of the half — a 90-yard catch and run down the UT sideline by John Burt, who got caught at the 2. Replays, however, showed Burt stepped out of bounds around the 25; Sam Ehlinger hurried the Horns to the line and snapped it before the Cowboys challenged the play. He scored on the play to tie things up 7-7.

Oklahoma State 7, Texas 0. It took two drives for the Cowboys to heat up, but when they did, they showed why they’re the country’s No. 1 offense. Pinned at the 4 after a big Michael Dickson punt, OSU drove the length of the field in less than 3 minutes powered by six Mason Rudolph completions. Texas, meanwhile, mustered only 44 yards in the opening quarter to two Longhorns drives did get into OSU territory.

Halftime — Texas 7, Oklahoma State 7. Texas received the benefit of the doubt on two key plays in the quarter. On Justice Hill’s fumble at the Texas 14, it was ruled that the running back’s knee did not hit the ground before the turnover. Two plays later, John Burt streaked down the sidelines for a 90-yard gain. Officials did not review if Burt stepped out of bounds, and Texas hustled to the line before Ehlinger hurried into the end zone on a short run.

Oklahoma State has had six drives — punt, punt, touchdown, fumble, punt and end of half.

2. A 14-0 deficit was avoided early in the second quarter when Poona Ford forced a fumble and Anthony Wheeler recovered it at Texas’ 14. That big play preceded Burt’s big play.

3. Michael Dickson uncorked a 58-yard punt that Kris Boyd downed at the 4. (The Cowboys, of course, then drove 96 yards for the opening score.)

4. We had another Tom Herman coaching binder moment. Texas went for it on fourth-and-1 at OSU’s 30 rather than risk a Joshua Rowland attempt from 47 yards into a stiff breeze. Chris Warren III converted the first down. (The Longhorns got zero points on the drive, however.)

5. On a third-and-8 from Texas’ 36, the Longhorns forced Oklahoma State to call a timeout before the snap. (The Cowboys ended up converting the first down.)

6. Malik Jefferson has the hit of the day — so far, anyway. He popped Justice Hill on OSU’s first drive. And Gary Johnson had an important third-and-short stop with 3-and-a-half minutes left in the half, forcing a punt.

1. How about a 34-yard loss? That happened in the second quarter when Trey Carter wrapped up Ehlinger in the backfield, and Ehlinger fumbled as he tried to throw it away on his way down. The ball went backward on the turf and about 15 yards later, Ehlinger recovered. Dickson punted it down to the 12.

3. Reggie Hemphill-Mapps’ rollercoaster return season continues. He decided on a fair catch — at the 4-yard line with 3:23 left in the half.

4. Texas has 10 rushing yards — against the seventh-rated rushing defense in the Big 12. The two leading rushers are a quarterback and a wide receiver.

The post It’s halftime, and Texas and Oklahoma State are all tied up, 7-7 appeared first on Hook ‘Em.