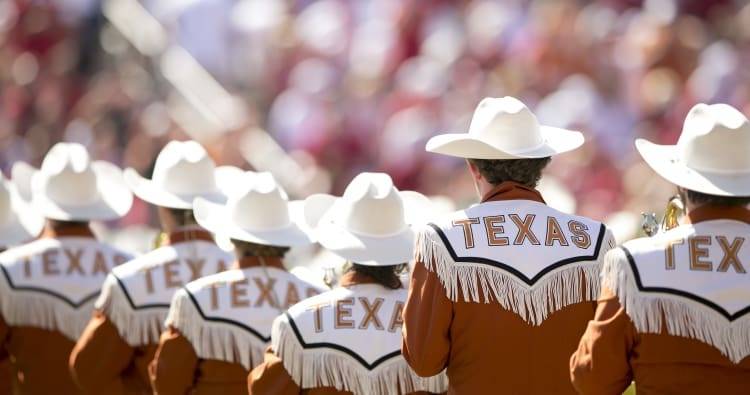 After a difficult loss to rival Oklahoma last weekend in Dallas, Texas will try to avoid back-to-back losses Saturday when it hosts No. 10-ranked Oklahoma State in Austin.

Halfway through the 2017 season, Texas appears to be a better team under Tom Herman. It has to start piling up wins though, lest it miss going to a bowl game for the third straight season.

Weather: The forecast calls for scattered thunderstorms in the morning with a 50 percent chance of rain. The high temperature is expected to be 87 degrees, with winds out of the south at 10 to 15 miles per hour.

The line: Oklahoma State is a 7-point favorite to beat Texas.

Which TV channel is Texas-Oklahoma State on?

The game between Texas and Oklahoma State in Week 8 is on ABC. In Austin, that is KVUE channel 24 over the air. Steve Levy (play-by-play), Brian Griese (analyst) and Todd McShay (sideline) will be the announcers.

How can I listen to the Texas-Oklahoma State game on the radio?

The Texas-Oklahoma State game in Week 8 will air live on the Longhorn IMG Radio Network. In Austin, the local radio affiliate is 104.9 The Horn. A full list of Longhorns radio affiliates can be found here, or you can click the play button below to listen online.

The past four games, any semblance of a running game for Texas has existed by the sheer will and strength of Sam Ehlinger. The freshman quarterback has now posted back-to-back games with 100 rushing yards, but no running back has come close to that number the past four games. Against Oklahoma, Kyle Porter led the running backs with 7 yards on 3 carries.

The offensive line has been decimated by injuries, which has been a big part of the problem. Derek Kerstetter, a freshman guard who was supposed to redshirt this season, has been starting at left tackle. The past four weeks, Longhorns have trotted out four different combinations of linemen. At some point — likely against a top-10 opponent like Oklahoma State — Texas is going to have to run the ball to remain competitive.

For the 4th straight game, Texas will start a different combination on its offensive line. UT ranks 91st in NCAA in sacks allowed. #HookEm pic.twitter.com/UkN0hkwjfY

So far, the Texas defense has proven to be a worthy opponent against some high-powered teams. The Longhorns held USC to 17 points in regulation and just gave up 29 to Oklahoma after it was 20-0 in the first half. Oklahoma State, though, presents a new set of problems.

The Cowboys rank first in the nation in total offense (610.7 yards per game), first in passing offense (411.2) and second in scoring offense (48.8 points per game). Quarterback Mason Rudolph and wide receiver James Washington have combined for 6 touchdowns and more than 800 yards. Is the Longhorns secondary up for their greatest challenge yet?

Not only has Oklahoma State won five of its past seven meetings with Texas, but the Cowboys are unbeaten in their past four trips to the 40 Acres. The streak started in 2010, breaking a span of 12 straight victories over the Cowboys. Since then, Oklahoma State has won at Royal-Memorial Stadium in 2011, 2013 and 2015.

The Eyes of Texas: 3 Cowboys the Horns will be watching