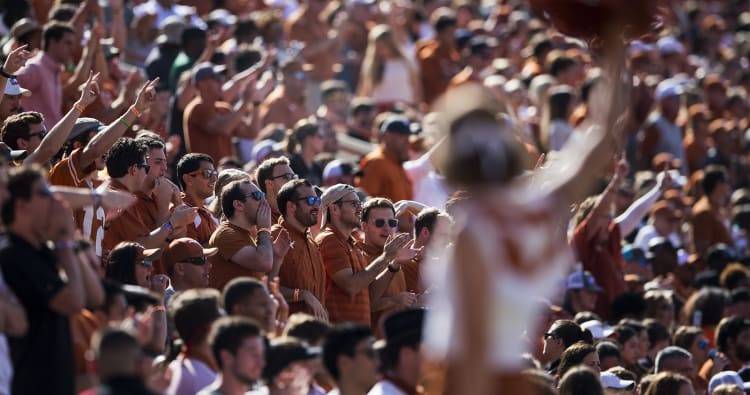 How would one accurately describe the current state of Tom Herman’s football program in Austin?

Thriving? Not exactly. Rebuilding? That fits, but it’s been that way for the past several seasons.

Disappointing? A 3-4 start for the fourth consecutive season likely isn’t the way most envisioned the Herman era getting underway at Texas, but that’s now the reality.

Regardless of how close Texas has come to enjoying a 6-1 record and likely even a top-10 ranking after losing to then-No. 4 USC, then-No. 12 Oklahoma and more recently, then-No. 10 Oklahoma State by a combined 11 points, the harsh truth is the Longhorns lost. Moral victories and close losses don’t earn bowl bids, nor do they turn the corner after years of mediocrity and sub-mediocrity.

Such is why USA Today’s Dan Wolken called Texas one of the ‘five most miserable’ programs in college football at the moment, making note of fan’s frustrations like those of Derrick Foreman, the father of former star running back D’Onta Foreman and current wide receiver Armanti Foreman.

“Under the circumstances, fans don’t want to hear how close Texas is to breaking through, which is the message Herman keeps trying to send,” Wolken said. “At Texas, you’re either good enough or you’re not. The Longhorns may lose close thanks to their defense, but they still lose.”

Whether or not the Texas football program is actually amid a miserable state is a matter of opinion, but there’s a case for and against its validity.

Yes, Texas is 3-4, just as it was each year of the Charlie Strong era. But all things considered, the Horns preseason expectations remain largely intact.

The general aspiration from the burnt orange nation seemed to be noticeable progress, a 7-5 or 8-5 regular season finish and a bowl berth. Of course, the offense isn’t too palatable for the Texas taste these days, but the Longhorns three most recent losses have come to teams that have all been ranked within the top six at some point this season. In those losses, Texas took USC and Oklahoma State to overtime and had a chance to beat Oklahoma in the final seconds, as well.

The product on the field has simply been among the most competitive in Austin in recent memory, regardless of the final scores.

With what was arguably the most grueling five-game stretch any Big 12 team was set to see this season now in the rearview, Texas is now projected to win four of its final five games, per ESPN’s FPI. If that projection came to fruition, the Horns would still finish the regular season on par with the general expectation of 7-5 and thus, secure its first bowl berth since 2014.

If that proved true, a Texas team boasting its first winning campaign since 2013 would then welcome a No. 2-ranked recruiting class to Austin and enter the offseason licking its wounds from an injury-plagued few months.

Whether you want to deem that as miserable or not, as Wolken did, the state of Herman’s program could be worse and still has plenty of time to get better, even throughout the remainder of his debut season.