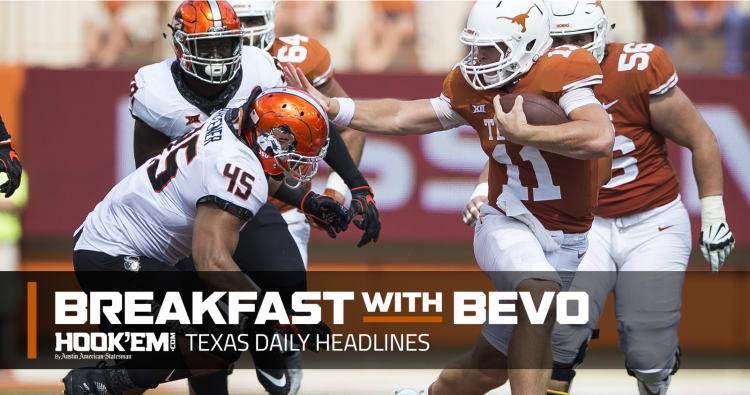 It’s now time for the Longhorns to lower their expectations for the season. At 2-2 in conference play, the Big 12 title game is out of reach and a bowl game could be in the cards. But the struggle is real, and with a game versus winless Baylor on Saturday, nothing is give any more per the Austin American-Statesman’s Brian Davis – “not with this bunch that can’t run the ball, won’t utilize its best receivers and collapses at the finish line.”

Late Sunday, Texas officials announced that freshman quarterback Sam Ehlinger was being evaluated for a head injury and was held out of Sunday’s team practice. Center Zach Shackelford suffered the same injury as well. The school did not reveal the extent of any of the injuries or a timetable for the players’ returns.

Cornerback Holton Hill conitnued his stellar season on Saturday with nice tackles versus the Cowboys and a huge pass break up on third down in the end zone. Hill’s play drew rave reviews from teammates and former Longhorns. Safety Deshon Elliott dubbed Hill a “first-round cornerback” and one media member gushed that Hill could be mistaken for a defensive back on the Seattle Seahawks.

The post Texas realizing the fight is real to get to a bowl game appeared first on Hook ‘Em.